Which air pollutants contribute to asthma?

How is fine dust created?

Primary fine dust is mainly produced by vehicles, power plants, heating systems and stoves in residential buildings. Fine dust is thus created in various combustion processes. But brake and tire wear are also responsible for the formation of fine dust.

Natural sources of particulate matter include volcanic eruptions, forest fires, and the stirring up of earth's crust material such as sandstorms.

Prof. Barbara Hoffmann from the Institute for Occupational, Social and Environmental Medicine in Düsseldorf explained the dangers of various air pollutants to us:

"Fine dust can affect almost all organ systems, especially the respiratory tract. We know that fine dust triggers inflammation in the lungs. This is especially true for people who already have a pre-existing condition such as asthma or a chronic obstructive pulmonary disease. 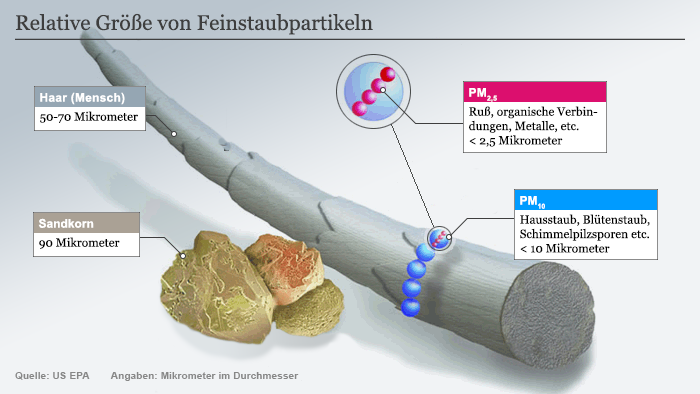 We also know that in those who live long-term in an area with high levels of air pollution, the fine dust accelerates processes that affect the vessels - such as vascular aging. That means: there is more inflammation in the body, there is more calcium deposits on the vessels. They then no longer work so well. They can no longer contract and expand so well. The blood pressure rises, we develop arteriosclerosis faster than normal with all the potential consequences.

It is now relatively certain that fine dust also affects the brain and very likely sets off premature aging processes there too. We now have pretty good evidence that particulate matter promotes diabetes mellitus. And we know that fine dust affects the birth weight of unborn babies and leads to a reduced birth weight. This in turn can cause more illnesses and deaths. The effects of fine dust are very diverse. "

Nitrogen oxides (NO and NO2)

The term nitrogen oxides denotes various gaseous compounds. They are made up of the atoms nitrogen (N) and oxygen (O). Nitric oxide (NO) and nitrogen dioxide (NO2) are the two most important. The nitrogen oxides belong to the so-called "mass pollutants" in the air. In Germany alone, more than a million tons of it is released every year.

How are nitrogen oxides formed?

They arise from reactions in combustion processes such as those from exhaust pipes and chimneys. Nitric oxide (NO) develops with atmospheric oxygen in the outside air into what is known as secondary NO2.

Hoffmann: "NO2 is an irritant gas. If you inhale it in higher concentrations, it initially irritates all mucous membranes. You would feel a burning sensation in your eyes, for example. This irritant gas can penetrate relatively deep into the lungs because it is poorly water-soluble. It can then lead to inflammation deep in the lungs. This particularly affects people who already have a previous illness, such as asthma or chronic obstructive pulmonary disease. They may then have more frequent asthma attacks or shortness of breath. We have now also seen that the frequency of death increases on days when nitrogen dioxide is more abundant in the air. " 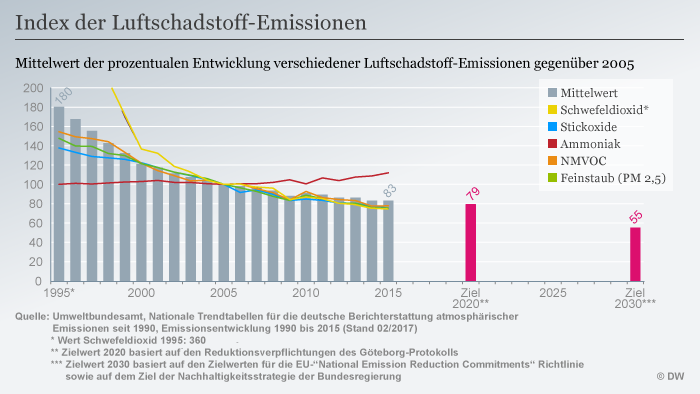 Sulfur oxides (SO and SO2).

How are sulfur oxides formed?

They arise from the combustion of sulfur and fuels containing sulfur, such as coal, heating oil, diesel and gasoline.

Hoffmann: "Since our coal-fired power plants have generally been desulphurized, our sulfur dioxide emissions have dropped significantly. We only have relatively low levels of sulfur dioxide here in Germany. It is - just like nitrogen oxide - an irritant gas that It can cause inflammation in the lungs. In principle, it can have the same effect as nitrogen oxide. But since the values ​​in Germany are relatively low, there are not as serious problems as with nitrogen dioxide. What is also important: Both are precursors for the formation of fine dust and thus have an indirect effect on health. "

In other regions of the world, flue gas desulphurisation has not been implemented as consistently as in Germany. Especially in Asia, the air pollution with sulfur oxides is therefore still very high and the air in the cities is often very bad.

In the atmosphere, ammonia reacts with various other gases, and particles develop (secondary fine dust). Ammonia is naturally deposited as an ammonium salt. Ammonia is a neurotoxin and can harm fish in water, for example. It can also damage plants and pollute soils. The ammonium causes acidification of the soil on the one hand and enrichment in the soil on the other. Ammonia is slowly broken down in the soil and converted into nutrients - nitrites and nitrates.

How is ammonia formed?

Agriculture has the largest share in the formation of ammonia. It is responsible for around 95 percent of this pollutant. It does not apply to cattle, pig and poultry farming and also to the use of mineral fertilizers.

Ammonia can convert to one of the many other nitrogen-containing compounds. This in turn has consequences for the quality of the air we breathe, for example through the formation of fine dust and ozone. 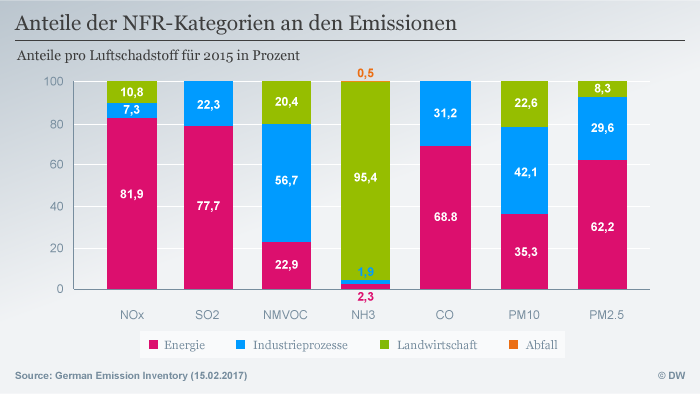 Since ammonia can turn into fine dust, it is just as harmful. It can cause cardiovascular and respiratory diseases. The same applies here: Previously injured people, such as asthmatics, are particularly at risk.

Ozone close to the ground that we breathe is considered a secondary pollutant. When exposed to strong sunlight, it is formed mainly from nitrogen oxides and the so-called volatile organic compounds (NMVOC) via complex photochemical processes.

How is ozone created?

The precursors of ozone are primarily man-made: The organic compounds are often gases from solvents - from paints and varnishes, for example, or from cleaning agents. Road traffic also generates such volatile organic substances - for example when fuels and lubricants outgas. But they also occur in nature: for example in the fumes from deciduous and coniferous trees.

Hoffmann: "Ozone is an irritant gas and also has an effect on inflammatory processes in the lungs. We know that ozone increases mortality in the short term. There are also initial studies which show that it increases in those who are exposed to ozone over the long term This in turn is probably triggered by the increased inflammatory reaction. The blood clots faster than it normally would. Then heart attacks, strokes and the like are more likely. And here, too, there is effects on the lungs with asthma and shortness of breath. "

Professor Barbara Hoffmann is working group leader at Institute for Occupational, Social and Environmental Medicine of the University of Düsseldorf