Why is cosplay fun?

Cosplayer
"Creativity is the focus of cosplay"

Cosplayers dress up as characters from films, series, books, comics or computer games. Since cosplay culture originated in Japan in the 1970s and spilled over to Germany from there, anime and manga characters in particular are still very popular. The cosplayers often produce costumes and accessories themselves in months of detailed work, exchanging ideas on the Internet and giving each other tips. The costumes are used at official conventions and competitions. Cosplayers also give the book fairs in Frankfurt and Leipzig the glamor of a masked ball. Yossi, Videros and Britt tell how cosplay has enriched their lives not only as a hobby but also as a craft.

When I like a character and am convinced that I can portray it visually well, I start researching. I collect front, back and detailed views of the costume and any props. Then I calculate the necessary materials and go to the weekly market armed with a list and reference pictures. What I can't find at fabric dealers, I buy in specialist shops or online, where I also order shoes, wigs and colored contact lenses. The costumes are worn to conventions or privately organized photo shoots. In the case of photo shoots, however, a good location must first be found because the character should be captured in the most suitable environment possible. You shouldn't wear every kind of costume at conventions either. At the Leipzig Book Fair, for example, I'm doing myself and my fellow human beings a big favor if I'm not wearing bulky hoop skirts or wings. For me, creativity is the focus of cosplay, but I also enjoy being really vain for once. As a little girl I always wanted to be a pretty princess at Mardi Gras - as a student I made my dream come true with flowing ball gowns and magnificent wigs every year. If I feel like it, I can be a prince now too! Or a superhero! Or secret agent! When do you come to wear an empire dress or a skin-tight catsuit in everyday life?

It was when I met my RPG forum that I met active cosplayers for the first time. You convinced me to appear in costume for the next Leipzig Book Fair as well. The entire community was very warm, so I wanted to visit other conventions quickly. I am fascinated by cosplay because, in my opinion, it is not just a hobby, but also a craft. It combines creative areas such as sewing, modeling and acting, so that you can let off steam in it. At conventions, for example, I try to depict my character in gestures and facial expressions as realistically as possible. Cosplaying and the community also help introverts develop a reasonable level of self-esteem. But everyone else can find themselves in this hobby - both the perfectionist who wants to win competitions, as well as manga and anime fans who cosplay with each other simply because they enjoy it. 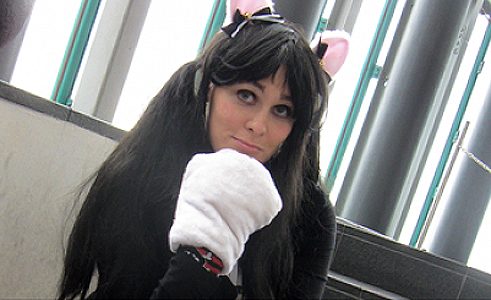 Britt T. | Photo: privatCosplay is a hobby for me that, unlike other leisure activities, I rarely pursue. There are only a few meetings, especially in winter. Between these breaks, however, there are always one to two weeks of panic activity and hectic tinkering before the respective conventions. Most cosplayers have really bad time management and sewing the night before the festival is a kind of running gag in the scene. But planning costumes together is always fun! Likewise, group cosplays, in which several cosplayers represent different characters from the same series. I find it particularly exciting how objects and items of clothing that actually only exist and work on paper can be copied and tailored with a limited budget. Inventiveness and a willingness to experiment are required! I am also impressed by how much effort has gone into the costumes. There is a sense of enthusiasm and energy at the festivals that I sometimes miss in everyday life. There it seldom happens that people are enthusiastic about a project and create something together, although they are not even paid for it.
<?