ECB in a dilemma between inflation, interest rates and debt

Conclusion: In recent years, the ECB has had a lot of room for maneuver, as the interaction between monetary policy and consumer price inflation has barely made itself felt. The enormous expansion of the balance sheet and the ongoing reduction in the interest burden for the euro countries were therefore not in direct contradiction to the inflation target. Monetary policy exaggerations also had no direct consequences for the ECB's fulfillment of its mandate.

The current economic crisis should subside and the inflation rate should rise in 2021 and 2022. This could result in a dilemma for the ECB due to rising inflation. The size of the ECB's total assets and the level of debt ratios in many euro countries cast doubt on the ability and willingness of the ECB to effectively face rising inflation. This can lead to the ECB adjusting the inflation target. Bund yields, on the other hand, should continue to trend upwards.

The current inflation rate in the euro zone (-0.3% in November 2020, 0.3% in 2020 as a whole) reflects the economic impact of the corona crisis. But in the course of 2021, inflation will rise, there seems to be a consensus among all forecasters. This applies to Germany as well as to the euro zone. With the expected economic recovery, the strength of the increase could even come as a surprise - especially in 2022. The question is likely to arise again how sustainable the higher inflation will be. Nevertheless, the ECB should face new challenges precisely as a result of rising inflation - with rising Bund yields as a result.

The ECB emphasizes again and again that an inflation rate close to but below 2% is still its goal. But if the inflation rate were to increase convincingly, this could put the European central bank in a dilemma. Because the indirect and, especially in times of crisis, hardly effective transmission mechanism between monetary policy and inflation has given the ECB a great deal of room for maneuver in recent years. So it was able to justify its policy of cheap money, which has relieved the euro countries of all pressure with regard to their debt sustainability, by a lack of sustainable inflation. In fact, the inflation rate in the euro zone has been well below the ECB's inflation target since the financial crisis. The current inflation rate is also far from the target, so that the ECB has no limits with regard to further measures. However, this harbors the risk of overreaction - especially if it is taken into account that the monetary policy influence occurs with a time lag and is not only reflected in higher consumer price inflation.

With the expected significant economic recovery from mid-2021 and a rising inflation rate in the course of 2021, the expansion of the ECB's balance sheet that continued until March 2022 could and should increasingly be seen as an exaggeration. An overreaction of monetary policy in 2021/22 may initially be viewed as less critical. After all, monetary policy behaves like a string - which you can always pull, but not push. But if the string is too long, even pulling it can be of little use - at least in the short term (see Prof. Sinn. Christmas Lecture 2020). Then a rise in inflation would be difficult to stop even in the medium term.

The exaggeration of monetary policy can be seen as a consequence of the enormous expansion of the balance sheet, which the ECB cannot reduce sufficiently quickly. However, it is also possible that the ECB will not or cannot sustainably increase interest rates at all due to the development of European debt. In view of the significant expansion of the debt ratios in many countries, the low interest rates significantly reduce their debt burden. Even if the effective interest burden is likely to react with a delay depending on the repayment structure, debt sustainability would increasingly be called into question in the case of basically positive real returns - especially in countries with weak economic growth. A sustained rise in inflation would reveal the ECB's restricted freedom of action.

The ECB's credibility could therefore come under increasing pressure. In particular, the idea that the ECB steers monetary policy solely from the inflation perspective is likely to be tested as a result of the expected macroeconomic developments. The central bank tirelessly emphasizes its inflation target. But in the In recent years, the ECB has been able to evade weighing up between rising interest rates for euro countries, higher inflation as a result of their limited degree of influence and slowed inflationary pressure. Change the goal to buy time? Certainly an option to keep buying-up programs more and more as a permanent option in the game. The consequences of such a policy are already known. The ECB, with its years of crisis policy in the form of negative interest rates and increases in the balance sheet and asset prices, is causing significant redistribution effects.

In terms of debt development, the euro zone basically paints a bad picture: Six years of uninterrupted economic growth (between 1.4% and 2.8%) and sustained falling interest rates were only able to reduce the euro zone's debt ratio slightly, especially countries with high debt ratios made little progress. Now the rate is increasing massively as a result of the corona pandemic. A return to the Maastricht criteria with the help of fiscal policy or through economic growth is out of the question. The sooner the EU recognizes this and can ensure sustainable or credible debt sustainability without assuming permanently extremely low interest rates, the faster the ECB will get the leeway it needs to be able to act freely not only in times of an ineffective transmission mechanism, but even in times of rising or normalizing inflation and the economy. This did not succeed in the past recovery phase. Until now, there was still too much of a belief that stable debt sustainability is possible through fiscal policy - if monetary policy gives states enough time. 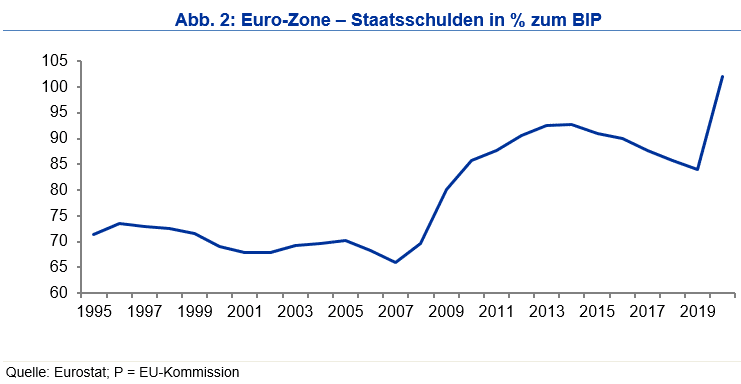 If the inflation rate rises as a result of a strong rise in demand, nominal GDP will rise sharply - which will lower the debt ratio. The prerequisite for this is that a sustained and significant rise in inflation is not choked off by rising interest rates. Monetary policy must therefore be reactive. For this she needs the legitimate leeway. The Fed is already preparing for it, pointing to an average inflation target and thus the need to allow higher inflation in the coming years. Will this also be an option for the ECB? Such considerations certainly play a role in the current strategy review of the ECB (see ECB Watchers Conference).

The ECB's monetary policy is currently distorting the entire yield curve, as it not only controls short-term interest rates, but also significantly influences long-term yields through its purchase program. At the moment, the low level of long-term Bund yields may not be viewed as absurd, as the inflation rate is negative and the European economy is burdened by the lockdown. With the expected brightening of the economy and the rise in the inflation rate, long-term interest rates can certainly be expected to pick up by mid-2021 at the latest. In principle, the termination of the buy-up program in March 2022 will break away an important support for negative long-term Bund yields, which will lead to a correction in advance. Because the current yield levels are incompatible with the expected fundamental development of the economy and inflation.

In the US, despite the Fed's focus on an average inflation rate, there has been a significant increase (more than doubling) in 10-year yields (from around 0.5% at the beginning of August 2020 to currently 1.17%), with no change is in sight at the short end of the yield curve. The reasons are the stabilization of the US economy since the second quarter of 2020 and the significantly lower Fed influence on the long end of the yield curve. The Fed balance sheet expanded significantly from March to July 2020, but since then the increase has been much less pronounced than in the ECB balance sheet, so that the degree of influence of fundamental developments is increasing again (see also Federal Reserve Board - Recent balance sheet trends). 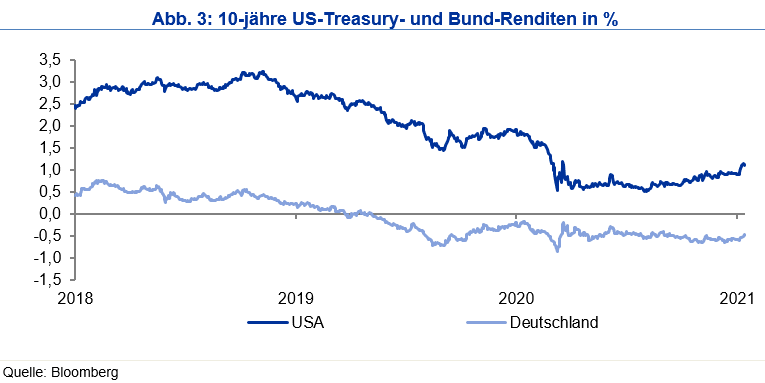 In order to keep yields low, the ECB could extend the purchase program again - driven by rising rather than falling inflation. But this seems an extreme assumption even for an ECB that operates according to the motto “whatever it takes”. The German yield curve should therefore pick up in the course of 2021, especially for long-term interest rates. However, this does not reflect the expectation that the European economy is on the right track in the long term. Rather, the development shows that the ECB is currently determining or manipulating the entire long end of the curve; as the crisis subsides, this will subside or inflation expectations will have more perspective again. Even if the short end of the yield curve should remain in negative territory due to doubts about the sustainable development of inflation and economic growth - and this is legitimized by the ECB and its adjustment of the target - higher interest rates will be long with the foreseeable end of the purchase program Inevitable end. The economic and inflation outlook in Europe is not as bad as 10-year Bund yields are currently still signaling.