Who owns the Khan Academy

Free online lessons are shaking up education, and Salman Khan is seen as a trailblazer. The instructional videos of his "Khan Academy" inspire sponsors like Bill Gates and Carlos Slim Helú. 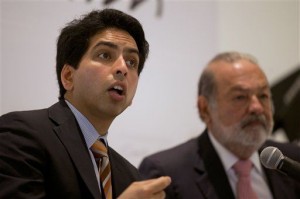 It starts with a black screen. From the off, a sonorous and friendly voice announces what the video lesson is about. The spectrum ranges from algebra to astronomy to macroeconomics. The screen fills with formulas, drawings and explanations scribbled in color. Whether square roots, hypotenuses or exponential functions: Terms that make some think of boring school lessons with a shudder are conveyed with passion in the voice. If that's still too theoretical for you, you can watch instructional videos about the debt crisis in Greece or learn about the complex mortgage bonds that were at the center of the financial crisis a few years ago. Or follow a discussion about the artistic value of Andy Warhol's famous Campbell soup cans.

The invisible star who owns the voice in most of the videos is 36 year old Salman Khan. For Microsoft co-founder Bill Gates, he embodies a future model of learning. Khan has built an online library with several thousand videos that can be accessed free of charge on YouTube or his website, including associated tests. He calls his project the "Khan Academy", and around six million users a month watch the videos. The basic idea of ​​making a body of knowledge available online free of charge has features of Wikipedia. But the Khan Academy aims to be more than a reference work. It wants to become a building block in the education and training of people all over the world and shake up existing school systems. There are already pilot projects in American schools.

What is bizarre is that Khan stumbled into his career as a YouTube professor without any educational training or experience. That makes him vulnerable to critics, especially since he doesn't hide how improvised his productions are. He told Time magazine: “Half the time I don't know what I'm going to say myself.” A couple of American professors once made fun of making a video themselves and looking for mistakes in a Khan- Lesson to point out.

That leaves Khan's followers and his select circle of supporters indifferent. Bill Gates once said it was a good day for the world when Khan got permission from his wife to quit his previous job with a hedge fund. On that day, the education system gained 160 IQ points. The foundation of Gates and his wife Melinda has invested millions in the Khan Academy, as has the Internet company Google, whose board chairman Eric Schmidt says he likes to refresh his math skills with the videos. One of the newest patrons is the Mexican Carlos Slim Helú, the richest person in the world according to the Forbes list.

Khan has not only attracted influential donors, but also copycats. He is considered to be the pioneer of one of today's major training trends, the “massive open online courses” or MOOCs, that is, courses and lectures that are accessible online free of charge to a huge number of participants. A number of such MOOC specialists with names such as Udacity, Coursera and EdX emerged in America last year. The organizations are partly non-profit and partly profit-oriented. Some are initiatives from universities and offer existing lectures in edited form, others rely on their own material. The Udacity co-founder Sebastian Thrun, who comes from Germany, said that Khan was an inspiration for his company. Emphasis and Udacity and other MOOC providers are university-level lectures, while Khan primarily targets school content.

Khan made his way to becoming a virtual lecturer without a pedagogical background, but with an impressive university education. Born in New Orleans to an Indian mother and a Bangladeshi father, he has four university degrees, ranging from mathematics to electrical engineering and computer science to economics. All titles are from prestigious addresses such as Harvard and the Massachusetts Institute of Technology (MIT). After graduating, he took a well-paying job as an analyst for a hedge fund in Boston.

The initial spark for his career change came from his own family. It was 2004 when Khan's family gathered for his wedding. Khan learned that his 12-year-old cousin Nadia was having trouble with math. He offered tutoring but had to do so by phone and internet because he was living in Boston at the time and she was in New Orleans. Nadia passed the next test with a left hand, and now other family members wanted support too. It became difficult to coordinate the lessons for several people, so the idea came up to record lessons and post them on Youtube. This allowed the tutors to watch the videos whenever and as often as it was convenient for them. Khan was soon astonished to find that it wasn't just his young relatives who were interested in the videos. The lessons found an ever larger audience, with users leaving comments such as “For the first time in my life I smiled at a derivative.” This spurred Khan on to keep making new videos. A mini-room in his house served as a production studio.

In 2008, Khan turned his project into a charitable organization funded by donations, and the following year he took the plunge and gave up his hedge fund job. The timing was not exactly right: Khan and his wife had just had their first son, and without a regular income, the young family had to save money. Donations to the Khan Academy were only made in small amounts at first. The turning point came in 2010 when Khan found a prominent patroness: Ann Doerr, wife of legendary Silicon Valley venture capitalist John Doerr, wrote Khan a check for $ 100,000. Then the ball got rolling, and millions followed from the Gates Foundation and Google. Khan was now able to pay a salary, rent offices and expand the organization. Today the Khan Academy has almost 40 employees.

Khan says education is ripe for a revolution from the Internet, just as the media and other industries have seen. He wants to use technology to make classes more personal, even if that may sound like a contradiction in terms. Today's system is too standardized and passive for him. Khan wants to move away from the traditional model, in which teachers teach their students content via monologue, which they then practice in homework. He advocates turning the tables: students should acquire knowledge at their own pace at home, for example by watching Khan videos. The time with the teacher is for discussion and personal attention. In addition to the teaching videos and tests, the Khan Academy also provides tools for the teachers with which the progress of each student can be tracked online. Khan assures that his material poses no threat to teachers and should not replace them, rather it makes their task more demanding.

In a book recently published in Germany, Khan described his ideal of the school of the future with other and sometimes radical ideas. If it were up to him, traditional marks with numbers or letters would be abolished and replaced with qualitative assessments. In the future, classes would consist of students of different age groups, with the older ones helping the younger ones. In addition, there would be no summer vacation in Khan's dream school; instead, the students would take vacation as needed. After all, if every student determines their own pace of learning, there would be no need for a rigid curriculum.

The Khan Academy says the use of its methods in the pilot schools has delivered encouraging results, for example in the form of a better level of proficiency in mathematics. A study that is currently being carried out by the SRI research institute at the test schools should provide more information about the Khan effect. The Khan Academy currently works with a good two dozen schools, mainly in California. In addition to these official partners, the Khan material is still used by thousands of classes around the world, according to the organization.

Khan has the ambition to gain a permanent place in the education system, but he knows that there are many unresolved questions for him as well as for the new MOOC providers. A sticking point are performance records, which are also recognized. So far, the Khan tests have brought virtual trophies, but they function more as a playful element and not as certificates. Khan also wants to find ways to finance his rapidly growing organization beyond donations. He's thinking about licensing his content. In any case, he still doesn't want to demand any money from his inquisitive audience. After all, the Khan Academy declares its official mission to be "to provide free, world-class education for everyone, everywhere."

Free online lessons are shaking up education, and Salman Khan is seen as a trailblazer. The instructional videos of his "Khan Academy" inspire sponsors like Bill Gates and Carlos Slim Helú.

An error has occurred. Please check your entries.