What are the characteristics of a design 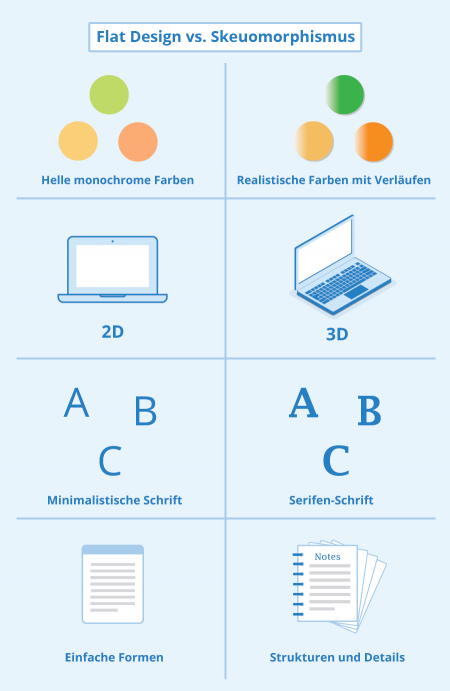 Flat Design (German: "Flaches Design") is a design style for user interfaces that uses simple, two-dimensional elements and bright colors. Flat design is often referred to as an alternative to skeuomorphism, which creates the illusion of three dimensions on two-dimensional displays and screens by copying real properties. The design language, which is centered on simple typography and geometry, became popular with the release of Microsoft's Windows Phone 7 in 2010. Windows 8, Apple's iOS 7 and Google's Material Design, which also use flat design, followed a little later.

The beginnings of flat design go back to the 1950s. This design first became known through the International Typographic Style known as Swiss Style. The current designs were originally developed for responsive web design, in which the content of a website is scaled depending on the screen size of the device. By using simple shapes and areas instead of complex images, flat design helps ensure that responsive websites can be loaded quickly even with low bandwidth connections.

Features of the flat design

Flat design is a purely two-dimensional design style. In the creative elements of the design, shadows, structures, color gradients and other means that add depth to an element are completely dispensed with. Every element in flat design, from frames to buttons, is smooth, devoid of 3rd dimension and razor sharp. In the context of flat design, website designers usually only use simple shapes such as circles, rectangles or squares.

Emphasis on typography and color

Because of the simplicity of the elements, typography plays an important role in flat design. To match the minimalist design of the elements, designers usually use simple sans serif font families. Different formatting of the fonts is used to point out to the user how the individual elements are to be used on a page.

Colors are also an important aspect of flat design. The color palettes used are, in most cases, much lighter and contain more hues than other websites. While most web applications concentrate on a few (often only three) different colors, designers often use six to eight different colors for the design of web pages in flat design. Certain shades are used more often than others. Retro colors - including orange, purple, green, turquoise, and blue - are the most common colors used by designers in the original flat design, as in Windows 8.

An example of a website that is designed in flat design can be found at pagelanes.com. As can be seen on the following screenshot, the site largely dispenses with shading and other three-dimensional elements and is characterized by a very simple and clear design.

The flat design with its minimalist elements focuses the user on the content of a website. The design language emphasizes user-friendliness through a clear visual hierarchy of shapes, colors and fonts and offers effective support for fast and intuitive navigation in desktop and mobile applications. Flat designs are easily adaptable in terms of adaptive and responsive design, easier for designers to implement and reduce the amount of data when transmitting a website.

The minimalist design without spatial depth and structures is at the same time the biggest disadvantage of flat design for users. An analysis by the Norman Nielsen Group found that flat design styles can affect usability because users don't always know what is clickable. In addition, some of the content information that is important for users is dispensed with in many flat design projects in order to keep the design simple. In an effort to emphasize the clean, streamlined qualities of the flat design, some designers fall into the trap of focusing too much on aesthetics, which negatively affects the usability of a website. This is a particular risk for web and mobile design. Important functions and interaction options can be hidden or visual cues that are known to the users are missing - all in the interests of simplicity.

The usability problems were solved by a further development of the original flat design called Flat 2.0 or Almost Flat. In these design styles and the Material Design published by Google in 2014, shadows, highlights and structures are again used to a small extent, which allow a hint of three-dimensionality and significantly improve user friendliness.

To quote the article, just copy this link:
https://www.seobility.net/de/wiki/Flat_Design
<?