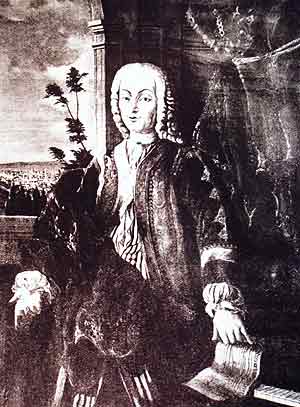 1700 is often given as the date of the invention of the fortepiano, as an inventory of the Duke's instrument collection was drawn up in that year, in which a "Arpicmbalo di Bartolomeo Cristofori, di nuova inventione, che fa il piano e il forte ". That is why we also have the term that later became common:" piano ... forte ".

Bartolomeo Cristofori was born on May 4, 1655 in Padova near Venice. Venice was the most important center of instrument making in Italy in the 16th century. Well-known keyboard instrument makers such as Francesco Ongaro ("the Hungarian"), whose harpsichord is in the Deutsches Museum, emerged from the city of Padova. We know little about Cristofori's years of apprenticeship; his biography begins at the age of almost 33, when he was hired as the new instrument maker by Prince Ferdinando de 'Medici in Florence in May 1688. The assumption is justified that Cristofori had already worked on his invention of the piano mechanics and was able to show the duke a functioning instrument. Details of a spinet that he completed in 1690 show that he had already developed the typical bridge of his fortepiano at that time.

Almost unique in the history of instrument making is a meeting that took place in the winter of 1709/1710 between Cristofori and the Marchese Scipione Maffei. In his "Giornale de 'letterati d'Italia", Maffei recorded for us what Cristofori told and explained to him about the new invention. For this purpose, a drawing was printed showing the new mechanics.

A later version of the drawing from 1719 (here left) was taken over and redrawn in a German publication by Johann Ulrich König (in Johann Mattheson, Critica Musica 1725 published) and may have been one of the ways in which Cristofori's invention was disseminated.

Maffei speaks of a donation from Duke Ferdinando to Cardinal Ottoboni in Rome; other instruments were sold. King João V of Portugal purchased instruments from Cristofori, including at least one fortepiano, but probably also a harpsichord, as the later Portuguese harpsichords have Cristofori properties. As is well known, the Portuguese instrument makers copied the Cristofori fortepiano and thus continued the Florentine tradition on the Iberian Peninsula.

It cannot be said that the invention of the piano mechanism spread like wildfire across Europe. The instruments were probably very expensive and not everyone was convinced of the possibility of being able to alternately play louder and softer. Apparently, according to Maffei's information, many fans of the harpsichord did not appreciate the comparatively muffled sound of the fortepiano. Singers, on the other hand, were apparently among the first to use the new instrument, and "Farinelli" (Carlo Broschi), the famous Castrato, was one of them. He accompanied himself on the Cristofori fortepiano.

Maria Barbara, Princess of Portugal and later Queen of Spain, was apparently also a proponent of this instrument, because after her death five pianos were mentioned in an inventory, four of which came from Florence, i.e. from Cristofori's workshop or after his death from Giovanni Ferrini who managed the workshop. Cristofori pianos must have reached Germany because the mechanics that Gottfried Silbermann used in his preserved pianos were apparently taken directly from a Cristofori (or Ferrini) mechanism. Apart from this example, the German fortepiano construction used different mechanisms, which can easily be explained by the complexity of Cristofori's mechanism.

Personal details of Cristofori's life were not recorded. We do not know what character traits shaped him. But when we look at his life's work, we see a great spirit of discovery, someone who persistently pursues his goal and has always looked for better solutions. In the field of harpsichord construction, too, he has developed new forms from the established harpsichord, such as double spinets and spinets with 4 'registers. A unique clavichord with an organ-like wave board was also developed in his workshop. In a codicil to his will we learn that he would endure an illness before he died and that he had always intended to return to Padova. The fact is, however, that he stayed in Florence, where he died on January 27, 1731. With that a life of the invention and production of musical instruments was fulfilled and ended. Cristofori left a great legacy with the pianoforte that still shapes our music making today. 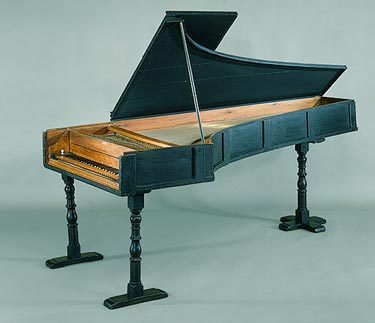 Although there is evidence that Cristofori built fortepiano as early as 1700, the oldest surviving instrument is from 1720, when it was already 65 years old. It is now in the Metropolitan Museum of Art, New York (see museum, web photo on the left). But what is known almost only to experts is that the soundboard was replaced during a restoration in 1938. As early as the 18th century, the original range of FF, GG, AA-c³ (i.e. FF # and GG # are missing) was converted to the current C-f³ and cut off about 30 cm from the case in the bass. Since the original leather covering of the hammer heads is no longer there, it can be said that the sound properties of the original condition have been irretrievably lost. Nevertheless, this instrument is the best known and was occasionally used for concerts and recordings, so that our sound conception of the first fortepiano is partly based on wrong premises.

Another fortepiano from 1722 is kept in the Collezione degli Strumenti Musicali, Rome, and although much of the original substance is present, the woodworm infested the instrument so far that one does not risk keeping the case under tension. Nevertheless, the specimen is an important document and, in connection with the other two fortepiano, shows which parts of the invention Cristofori was still working on at this time.

The last preserved fortepiano is from 1726, has the smaller size of C-c³ like the 1722 instrument and is now in the Musical Instrument Museum of the University of Leipzig. The state of preservation is largely original (although the original hammer leather is not present), so that we can learn a lot about Cristofori's plans from this instrument. Nevertheless, this fortepiano is not kept under tension for conservation reasons and is therefore not available as a functioning musical instrument.

Cristofori's instruments from 1722, 1726 and another combination instrument, a harpsichord fortepiano by Cristofori's pupil Giovanni Ferrini from 1746 (Tagliavini Collection, Bologna), show that the piano mechanism was already fully developed. Practical experience with replicas by Rainer Thiemann, David Sutherland, Kerstin Schwarz and Denzil Wraight have shown that the mechanics function reliably with careful production. We can thus judge that Cristofori's invention was entirely workable. It is interesting to note that it was the Cristofori push mechanism that was later adopted and integrated into the modern pianoforte mechanism, not the Viennese mechanism popular around 1800.

HOW DOES A CRISTOFORI HAMMER WING SOUND?
A RECONSTRUCTION BY DENZIL WRAIGHT IN CONCERT

How did Cristofori's fortepiano sound? This question can no longer be answered from the existing instruments alone, because important parts have been lost. We do not know exactly how the hammerheads were intoned, and no references to the string sizes are yet available. That was the starting point for my reconstruction of one of the 56-key fortepiano that was owned by Maria Barbara in Spain. All of these instruments did not survive the time, but the existing fortepiano by Cristofori and Ferrini contain enough information to reproduce a mechanism exactly and offer insight into the workshop practice, from which we can reconstruct the size of the case.

The stringing strength of a fortepiano is one of the factors that determine how you can play the instrument: If the strings are thin, you will only be able to play lightly and quietly. From my research into the strings of Italian harpsichords it has emerged that Cristofori used a very specific numbering system for the strings of each of his harpsichords. Exactly this stringing system was found in a Portuguese fortepiano (1767 Antunes, National Museum of Music, Vermillion, SD, USA), which was apparently built after a Cristofori instrument. Interestingly, string gauges from the 1749 Silbermann fortepiano (Silbermann used Cristofori's invention) indicate similar results. This gave an indication of the thickness of the strings to be used on Cristofori (at least on the later instruments).

Through practical experience with his hammer mechanics you can see that he tried to produce a round sound rather than a pointed or metallic one. Not only the use of the hammerheads made of paper rings typical for Cristofori (see photo of the reconstruction), but also the careful dimensioning of the head size - they become larger towards the bass - shows that the brilliant, metallic sound was not sought. 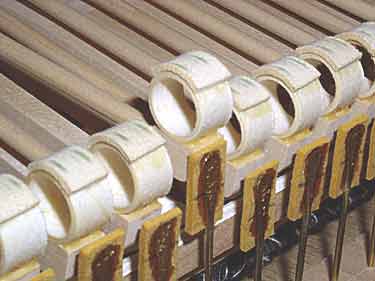 Maffei's tradition also clearly points in this direction, because the harpsichordists found the tone too soft and dark (in the original text "troppo molle e ottusa"). There are also other factors from Cristofori's harpsichord building tradition that steer the sound in this dark, colored direction rather than a light, silvery one. Cristofori, like his colleagues from Venice, only used cypress wood for the soundboard, a wood that gives the sound a clear, robust character and not a rather brilliant one, as one can expect from a spruce soundboard. He also used brass strings, as in his harpsichord construction, which also produce a colored sound. So if anyone thinks a Cristofori fortepiano from 1730 sounds like a weaker version of a Viennese grand from 1780, they will be surprised. You can find out what impression this reconstruction makes in the concert by Ella Sevskaya on April 4, 2004 at 6:00 p.m. in the music hall of the Deutsches Museum.

Ella Sevskaya was born in Ukraine in 1961. First piano studies with Elena Kamenkovich. At the age of 13 she made her debut with Shostakovitch's Piano Concerto No. 1. She also studied with Regina Horowitz in Kharkov (Ukraine) and with Nathan Perelman at the University of St. Petersburg.

Her interest in early music led her to deal with continuo playing; so she worked with various ensembles in St. Petersburg (Musika Practica, Ars Consoni, New Holland). In 1994 she moved to Munich to study harpsichord, fortepiano and historical organ in depth. Here she continued to work both as a soloist (harpsichord, lute piano, piano) and as a continuo player. In recent years she has mainly specialized in the field of fortepiano and harpsichord. In addition to concerts in Germany, Italy, Ireland, Scotland, England, France and the USA, she researches classical performance practice and teaches fortepiano and harpsichord at the international summer course in Cortona, Italy. She has appeared at international symposia on historical keyboard instruments in Michaelstein, Florence and at the BBC (Early Music Show) and held a master class at the Royal Academy of Music in London. As a harpsichordist, she plays in the Rosenheim Chamber Orchestra and the Byrd Consort and also teaches at the Rosenheim Music School. A CD with works by Dussek, Beethoven and Ries on a fortepiano has recently been released by the English label Quilisma published. 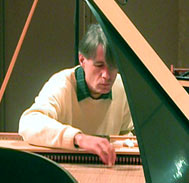 Denzil Wraight was born in Rochester, Great Britain, in 1951 and has lived in Germany for over 20 years. He studied philosophy at Queen's University of Belfast and gained practical knowledge of harpsichord making from Thomas Wess in Liverpool. By studying Italian instrument making for several years, he laid new foundations for its knowledge. His doctorate dealt with the stringing and tuning of Italian keyboard instruments. Part of the dissertation was a catalog of 748 instruments. He has published on his specialty in various magazines and encyclopedias. His work as an instrument maker mainly includes Italian keel instruments, but a Walter fortepiano and a chamber organ after Lorenzo da Pavia (1494) are also part of his opus.