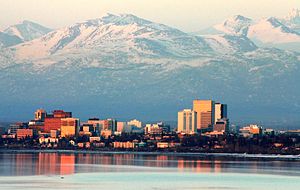 Because Alaska is so far north, winters are long and cold. Four fifths of the country's area is frozen all year round, so it is permafrost. Alaska is in the cold-temperate climate zone.

Nevertheless, you can already notice the climate change. Even the famous Iditarod dog sled race suffers. The temperatures in the last few races were so high that the sled drivers only drove at night because their dogs were getting too warm. In addition, they could no longer cross the rivers because the ice is no longer that thick.

The Iditarod dog sled race always starts in March. For this, extra snow is brought into downtown Anchorage.

Although Alaska is almost five times bigger than Germany, only around 740,000 people live there, about as many as in Frankfurt am Main. By far most of them live in Anchorage, the largest city in the state. Part of the population are Indians or Inuit. However, large parts of Alaska are almost uninhabited. Some places are so remote that no road leads to them. They can often only be reached by seaplanes or ships.

In Alaska, gold was previously searched for, and later oil. It has been found that there is a lot of oil on the coast of the Arctic Ocean. However, the raw material has to be piped in long pipes to southern Alaska and then loaded onto ships. This also has great disadvantages for the environment. There is one particularity to the profits from sales. Half of the annual profit is distributed evenly among the residents of Alaska. That's a little over $ 1,000 per capita.

Today Alaska is also the destination of many tourists. It is above all the almost limitless nature that fascinates many people in this remote area. You will find many huge coniferous forests and lakes there. Because of the harsh climate, there are also large areas where trees no longer grow. There is tundra. There are also numerous high and snow-capped mountains and glaciers, as well as some volcanoes. The highest mountain in North America is also in Alaska. Denali is 6,190 meters high. Many polar bears, brown bears and other wild animals roam the vast natural landscape.

What happened in Alaska before?

Nomads from Siberia were the first to come to America about 36,000 years ago. In the Ice Age the sea level was even lower and so there was a land bridge between Asia and North America. All American Indians are descended from these settlers. At the end of the Ice Age, the glaciers melted and the sea level rose again. The two continents were separated again 10,000 years ago.

Russian fur hunters came to this area in the 18th century. The colony of Russian America later emerged from their settlements. But Alaska was too far away and difficult for Russia to manage. The journey from the Russian capital took more than half a year. When Russia had little money after a lost war, the Russian tsar allowed Alaska to be sold. The United States bought the area in 1867 for $ 7.2 million. That equates to a price of just $ 4.74 per square kilometer. But the purchase was very controversial in the United States. Opponents considered the land useless and buying it a waste of money. They called the purchased land a "freezer" or "polar bear enclosure".

In 1925 a dangerous disease broke out among gold prospectors in Alaska. Medicine was brought to the sick with sled dogs. The trip lasted five and a half days. It normally took three weeks for this route. This race against time became the Iditarod dog sled race. This race was made famous by a book and a Disney film. The film has the German title "Snowdogs - Eight Heroes on Four Paws".

The flag of Alaska is considered to be one of the most beautiful in the United States. It is the result of a competition among school children in 1927. Most of the 700 designs used symbols such as the midnight sun, the aurora borealis, bears and pans for gold. The first prize was awarded to a 13-year-old native. He got $ 1,000 and a watch for it. His design shows the constellation Great Bear with the North Star.