Nuclear weapons are easy to manufacture

1. TNT (trinitrotoluene)
2. Fissure material in the form of a ball
2. (Plutonium-239 or Uranium-235)
3. Neutron source
Fig. Structure of a nuclear weapon

An atomic bomb has a ball made of plutonium-239 and uranium-235. A neutron source is located in this sphere, but it only becomes effective when the trinitrotoluene (TNT) surrounding the sphere explodes. The critical mass of the fissile material is reached through the pressure of the explosion and the compression of the radioactive substances.

When an atom bomb is detonated, an uncontrolled chain reaction takes place. The number of nuclear fission increases like an avalanche. Tremendous amounts of energy are released in an explosion.

A sufficiently large amount of fissile material (uranium 235) must be available for an uncontrolled chain reaction.

Even with atomic bombs that are built differently, the principle is always the same.

These two fissile materials that can be used are very expensive because only traces of uranium are found in nature, which means that plutonium has to be produced artificially.

The nuclear fission bomb must use enriched uranium. This has to be brought from a subcritical mass to a supercritical mass in a short time. 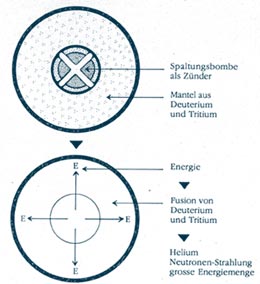 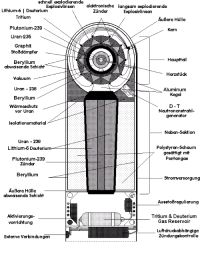 Structure of the hydrogen bomb
For a larger view, click on the picture.
Source: home.arcor.de/mathiaskempke/files/nuk/hbombe.html