How do you splice wires

A winch rope usually consists of 7 strands, each made up of 7 wires ("7x7"). This arrangement results from the laws of geometry, according to which exactly 6 touching circles of the same diameter can be arranged around a circle:

The 6 strands wound around the outside are called cardels, the inner straight strand is called the core. The Kardeelen all run clockwise (like a screw thread) around the soul. The wires of the individual strands can be twisted to the left in the same direction (regular lay), or alternately in the case of neighboring cardelals to the right or left (alternate lay), which is intended to reduce the self-untwisting of the rope, but is more expensive.
For modern gliders, winch cables with an outer diameter of 4.2 mm (wire with increased material quality) or 4.5 - 4.6 mm are used.

Splices are generally all ways to connect two rope ends together. Splicing is necessary in a glider take-off winch after a piece of tow rope has been damaged, e.g. B. Kinks and tears from a twisted rope or a rope salad had to be removed. Sometimes a tow rope is lengthened with a spliced ​​piece to ensure the simple layer of rope needed to protect the drums, or worn sections of the tow rope are replaced with new rope.

There are many different types of splices, which differ in how quickly they can be made, what breaking load they have and how durable they are.

First, the fastest but worst method is shown here. A rope clamp (nail) is pushed onto each end of the rope and the ropes are nailed parallel to each other. This does not constitute a permanent connection because the rope clamps rub thinly on the floor, bend the ropes at the nails and thus expand them again. If the ends of the rope protrude to prevent the nails from slipping, there is a risk of injury on the one hand, and widening due to grass penetrating and kinking in the winch rope guide on the other. According to SBO, clamp connections are to be checked regularly and replaced in good time. The time it takes to create a real rope splice quickly pays for itself.

With 3 nails the connection is already stronger, but not more flexible either. The middle nail only needs to absorb the axial forces, which is why the triple nail point can hold out a few starts of the ASH. The two outer nails can be attached so that no end of the rope protrudes.

At the nail points shown above, the rope nails almost exclusively transmit the pulling force of the winch. The so-called Oerlinghausen quick splice avoids this by twisting the two rope ends together. To do this, take one end of the rope, slide a nail on it and unwind 3 neighboring cardeles over the same length (at least 50 cm, so that the splice does not become too stiff and both branches are evenly loaded). Now you put the ropes together by winding the 3 loose cardels in the rest of the opposite end of the rope that contains the core ("three on four"). When winding the second strand, make sure that the ends of the cardeles of the same rope are placed at the same height so that both strands have the same length. The ends of the cardeles are secured with the rope nails. When finished, the whole thing looks like a double nail point at first glance, but with the small difference that firstly the rope nails hardly have to absorb any tensile forces and secondly the ropes do not kink because they run centrally into the rope nail.

End A and end B. B is pierced with an awl a good 60 cm behind the cut point 3 + 4 (means that the core is not pierced centrally, otherwise it would be 3.5 + 3.5), here A is also completely carried out a good 60 cm. Then turn the awl in rope B half a turn or a full turn in the direction of the long end and repeat A through and so on, about 15 times. Proceed in the same way with the B end in A. The protruding ends of the rope are pinched off. Doesn't look overly beautiful, but it lasts.

The only permanent connection is a real splice that works without rope clamps, because the aluminum works on the pulleys of the winch, the rope windings of the drum and when grinding on the ground. The functional principle is that of a finger trap. The cardeles are "knitted" together in such a way that the splice contracts under load and the cardeles clamp each other tightly. A clean splice can be made quickly with a hemp rope, but the stiffness of a steel rope makes splicing a time-consuming and strenuous affair (2-3 hours for 2 people without a special auxiliary device).
First you take the ends of the rope and wind the cardels down from the core over a length of about one meter. To prevent them from becoming independent, a bit of wire is stretched around the rope at this distance. Then you pinch off the protruding souls at this point and push the cardeles of the two ropes into one another as you do with your fingers when twiddling your thumbs. Now you tie the cardeles of one rope together with wire so that they don't stick around.
For the following work steps you need a fixed workbench with a vice and aluminum protective jaws, a plastic hammer, protective gloves, an awl, a water pump / pipe wrench and a block of wood that is as high as the vice. First you put the future splice on the table and take one of the free cardels, which should be to the right in the case of a right-hander, while the other five free cardeles are bent back to the left to make room. The threading principle is simple, but you have to keep track of things. The cardel that you have in your hand has two neighbors of the opposite right-hand rope (like your fingers when twiddling your thumbs), between which it runs out. This cardel must now be threaded over the neighbor on the side facing away from the splicer and under the two other still closed cardeles. To do this, one pierces with the awl "over one above and under two" and pushes / pulls the cardel next to the awl through completely. Make sure that the cardel does not twist and kink. Now you turn the rope a bit towards you and take the next free cardel. "Over one over and under two through". The cardel that was previously threaded through remains to the right or below the second. When piercing the fifth of the six cardeles, particular care must be taken not to cross the free cardeles within the closed right-hand rope. Once you have finished the first "round", i.e. threaded all 6 cardels once "over one over and under two", you carefully pull them back a little to the left so that the splice is tight and not too long. The second round is threaded in the same way, but then the helper can pull back more with the pliers and the vice and the splicer then work the braid with stretched cardeles under tension with the hammer on the wooden block so that the cardeles fit into the new mesh to bend. The 3rd and 4th round also runs according to the scheme "over one over and under two through" with subsequent retraction of the cardeles and knocking of the splice under the drawn cardeles. After the fourth round you shorten two free and opposite cardeles. The 5th round is then only completed with the four remaining Kardeelen. Before the 6th and last round with the last cardels, two more, opposite cardels, which have only been spliced ​​for five rounds, are shortened. By doing this, the splice is tapered and smooth. If you have completed the six rounds with the cardeles of one rope, you turn the splice over and do the same with the cardeles of the remaining rope. Finally, pinch off the protruding cardeles as much as possible.
The reward for the work is a rope connection that lasts at least as long and is at least as stable as an intact rope. It is flexible and there are no protruding parts that can damage the pulley of the winch or create new rope salad.


Modification of a description by Josef Bayer, Gaimersheim

First, twist the cardels of the left end of the rope 1.2 m and the right end of the rope 0.9 m down from the core and cut off the exposed cores. Now you thread the cardeles of both ends of the rope alternately between each other like with a short splice, as you push your fingers into each other when twiddling your thumbs. Hold both ropes at the joint with your left hand. The whole thing looks something like this:

Since later, when staking the cardeles, work is always done against the direction of twist and the vast majority of ropes are twisted to the right like an ordinary screw, a cardel coming from the right and the neighboring cardel coming closer to the viewer from the left are considered as a pair:

In the case of a short splice, all cardeles are stitched at the same height, which is why the cross-section swells and the threading becomes confusing. The trick with the long splice is that you distribute the cardeles to a total of 6 places where they are stuck. With your free right hand, you wind a cardel of the right end of the rope down a further 0.9 m and the paired cardel of the left rope into the resulting gap in the right rope. The right cardel comes to lie behind the left cardel. The remainder of the right cardel is shortened to 30 cm.
Next, take the next left cardel and wind it out 0.6 m, as well as your right partner in the manner described above along this length. Both protruding cardeles are shortened to 30 cm again.
The third pair of cardeles (you work your way around the rope) goes to the right again, namely 0.6 m. The fourth pair of cardels is moved 0.3 m to the left, analogous to the above, 0.3 m to the right, the fifth 0.3 m into the right rope " ". The protruding ends are cut back to 30 cm so as not to lose track.
The sixth and last cardel pair remains at the joint between the two souls, so that 7 strands can transmit the tensile force at this transition and there is no reduction in the breaking load.
After twisting, the protruding cardels should be distributed as follows:

Finally, the protruding ends of the cardeles must be stabbed. A cardel coming from the left is placed over 1 adjacent one and threaded under the next 2 (rearward from the viewer). This is done 3 times in succession with each cardel. The cardeles coming from the right are accordingly threaded towards the viewer so that they run like the left ones against the direction of twist of the rope:

The "Long Splice Bayreuth Modification" (asymmetrical) is ready when the protruding ends have been clipped off after the cardels have been cut. This splice is thin, flexible, fully resilient, easy and relatively quick to produce in about 1 hour by a single person.

All drawings are to be regarded as schematic! 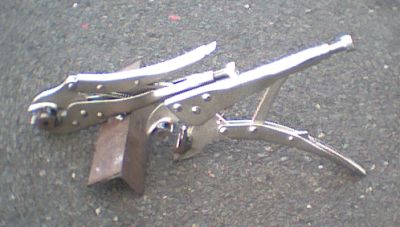 Modified clamping pliers according to Josef Bayer (Gaimersheim)
To hold the splice (left) and open the cardeles (right) by twisting against the direction of twist of the rope. Half-shells with correspondingly large holes are welded into the pliers. In contrast to a vice, clamping pliers can be opened and closed quickly. The cardeles can easily be threaded through the opened cardeles of the rope.   ... is the one you don't need to do.by Hans-Georg Rüth, Stuttgart