What is a suspected gene.

The Chinese government has banned the scientist He Jiankui and his colleagues from further research activities. The generation of genetically modified babies he reported is "extremely hideous in nature" and violates Chinese laws and scientific ethics, Deputy Science Minister Xu Nanping told the state-run Xinhua News Agency. A spokesman for the ministry said it was strictly against genetic manipulation in babies and had already "requested that the organization concerned suspend the scientific activities of the staff concerned".

The country's National Health Commission and the Chinese Society for Science and Technology (CAST) had previously distanced themselves from He. "The current situation, as it is reported by the media, is a serious violation of national laws, regulations and ethical guidelines," said the deputy chief of the health commission, Zeng Yixin, in an interview with the state broadcaster CCTV. A determination will be made to get to the bottom of the allegations, he said. Because science and technology are developing rapidly, it is necessary to adhere to "technical and ethical standards". 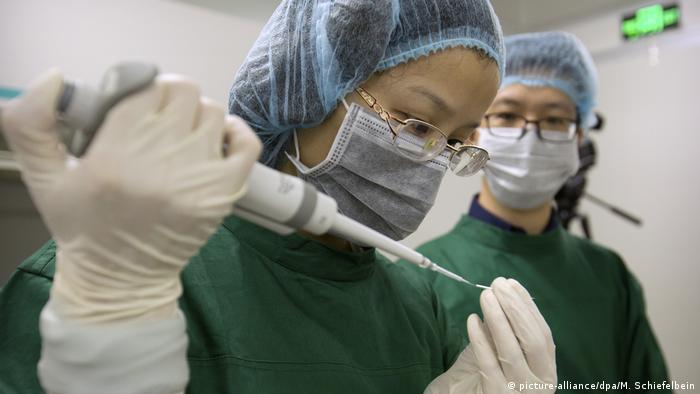 At the beginning of the week, the researcher, hitherto largely unknown internationally, caused horror among scientists and ethicists around the world with a video published on YouTube. In it he announced the birth of the first genetically modified babies Lulu and Nana. Using the Crispr / Cas9 gene scissors, he said he had deactivated a cell receptor in the embryos that is important for infection with the HI virus.

Risks for girls and their offspring

There is no independent confirmation for the claim so far. In addition, experts question the medical benefits of the trials and point to health risks for the two girls and their offspring.

He defended his work against criticism at a specialist conference in Hong Kong on Wednesday. He had announced that another woman was bearing a genetically modified child. After the end of the congress, the organizers of the conference condemned the experiments as "irresponsible". It was too early to make changes to DNA that could be passed on to future generations, the statement said on Thursday. The allegations made by He are "deeply worrying".

The research also met with criticism internationally. "He Jiankui has clearly crossed a red line, mainly because his research ignored the concerns of the international scientific community regarding the editing of human germ lines," said the director at the Max Planck Institute for Infection Biology in Berlin. The two other key developers of the gene scissors, US researchers Jennifer Doudna and Feng Zhang, had previously distanced themselves. Other researchers accused He in Hong Kong of having jeopardized the reputation of genome research as a whole with his "non-transparent" experiments.