Is there a bureaucracy in Bhutan?

All photos were taken by the author in 2004 and 2005. They are part of the archive "Flood of Images Jontes"

Today paper is one of the most important cultural goods in the world. Its story has two branches.

The name already says something about its western ancient origins. Papyrus, a swamp shrub, provided the common writing material for Egyptians, Greeks and Romans and subsequently all other Mediterranean peoples, while the parchment, named after the ancient Pergamon, was available for valuable and legally important written documents and artistic copies for miniature painting until the modern era was standing.

In Central Europe, paper was only used for documents from the 14th century onwards, with rag paper initially made from textile fibers, and then in the 19th century it was rounded off by wood pulp for rotary or newsprint.

Today there is the traditional production of high quality, "hand-made" paper only marginally and produces special letter and certificate paper.

Not so in Asia, where in the foothills of the Himalayas there is still hand-made, traditional, plant-based paper, which is used on the one hand for the souvenir block prints of Nepal and northern India, in the last of the former Himalayan kingdoms, but in Bhutan it is mandatory for official correspondence must be used.

The knowledge of this technology may have come from China.

The invention of paper happened there during the Han dynasty, i.e. in the 3rd century BC. Its production was first described in the 2nd century AD. Previously, bamboo strips or turtle shells were scratched for oracle purposes.

Since then, however, paper has been written on with brush and ink and has thus also created one of the most aesthetically pleasing writing systems. In South Asia the leaves of the Talipot palm were also used, written on by scratching, dried and the lettering colored. Very old palm leaf libraries still exist in India. 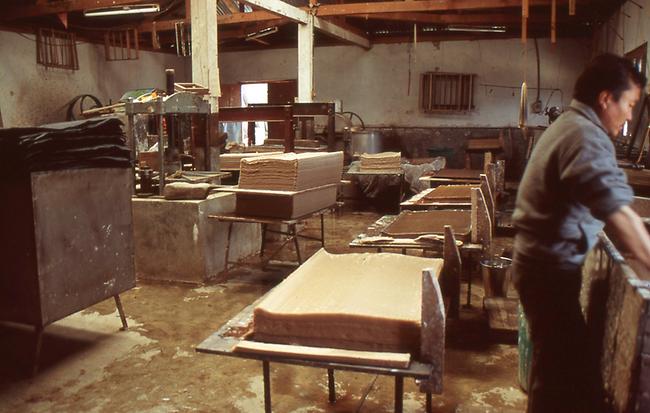 The paper is produced in such workshops, under CC BY 4.0
For the Buddhists in particular, the use of parchment was superfluous because it would have meant killing animals

In the constitutional monarchy of Druk Yul ("Land of the Thunder Dragon", Bhutan), many areas of public life are regulated from above.

This includes not only the uniform dress code for the entire population, but also the requirement that all correspondence with the authorities be handled on local and thus handmade paper.

This also means that not only is an old handicraft technique still in bloom, but the production of paper has no environmentally harmful consequences.

In Bhutan everything and everything is subordinate to the preservation of the undisturbed nature. That is also the reason that this country is one of the least endangered natural areas on earth.

Bhutanese paper is world famous today. It is also exported, since in the West especially artists who devote themselves to watercolor painting particularly appreciate the structure of this natural product.

One of the most important production facilities for this is located in Thimphu Thimphu, Bhutan, the capital of Bhutan.

We would classify this workshop as a small business. In Bhutan with its only 800,000 inhabitants, however, this has a significant share in the production of this first-rate cultural product.

This paper is made from the bast of the daphne bush, which is a kind of paper mulberry tree.

Its bark is peeled off, the rough outer parts removed and the inner parts cut into strips. Then these are tamped until a coarse-grained mass is formed.

This base mass is then boiled for several hours with constant stirring in water that has been mixed with ash, until a fine-fibred pulp is formed.

From this an evenly thin layer is then scooped onto a fine-meshed sieve in a wooden frame.

The still wet leaves are then bundled and halfway drained under pressure.

After further drying, the leaves are then placed on fabric-covered frames, where all moisture is completely removed from them.

The paper is now ready and can be used for its intended purpose. As you can see, not a single machine was used in the production process and apart from cooking, no energy was required.