What is the movie Martyrs about 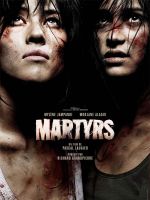 Young Lucie escapes from an abandoned factory building in which she has been held for a year. The frightened girl, however, does not want to give any information about her kidnappers and it is determined in the hospital that she was not sexually abused. But why she was then held for so long remains completely in the dark. In the orphanage, Lucie befriends Anna and tells her that she is being chased by a creature that wants to hurt her. 15 years later, Lucie (Morjana Alaoui) seems to have found her kidnapper at the time and the horror takes its course ...

In no other horror film in recent years, opinions differ as much as in "Martyrs". Some find him just sick and perverted, others describe him as one of the "best horror films of all time". The fact that three men in Berlin should have collapsed while they were watching the film makes for a queasy feeling before the film begins. Should you really watch the film? Suffice it to say: If you can't stand films like "SAW" or "Hostel" because of the brutal scenes, maybe you shouldn't watch "Martyrs".

The splatter scenes aren't even that shocking, because they aren't much worse than in "Saw" and "Hostel" (at first) either. The film just seems so real and serious. There are no funny comments from stupid blondes. "Martyrs" is just badass. The actors are all really good and you don't have the feeling that there is any acting. It all looks so real. As if you weren't watching a movie, but were on site and had to watch this cruel torture.

The first half of the film is mostly about Lucie, who wants revenge on her supposed tormentors. You can't help but just feel sorry for her, just as you did later with her friend Anna. The film also moves slightly in the mystery genre, as the creature is somewhat reminiscent of the ghost girl from the "Ring" films or from the "The Grudge" films. You can already guess what the creature is all about, but that doesn't change the fact that it is really scary.

The film is, for the most part, absolutely unpredictable, and there are some shocking story twists for the viewer. In the end, the cruelty climaxes. For more than 20 minutes you have to watch a girl being tortured and humiliated and thus deprived of all humanity. It goes so far that as a viewer you almost burst into tears, but still can't take your eyes off the screen and watch the whole time spellbound.

Somehow I didn't really like the ending or the dissolution, if you can call it that. The whole thing looked so far-fetched.

The French prove once again that they really have what it takes to shock the audience with their horror films. "Martyrs" is really not easy fare and therefore not recommended for the faint-hearted audience. Horror fans shouldn't miss the film, because it casts a spell on you and just gets under your skin.

Discussion on this film