How can I charge my 4G dongle? 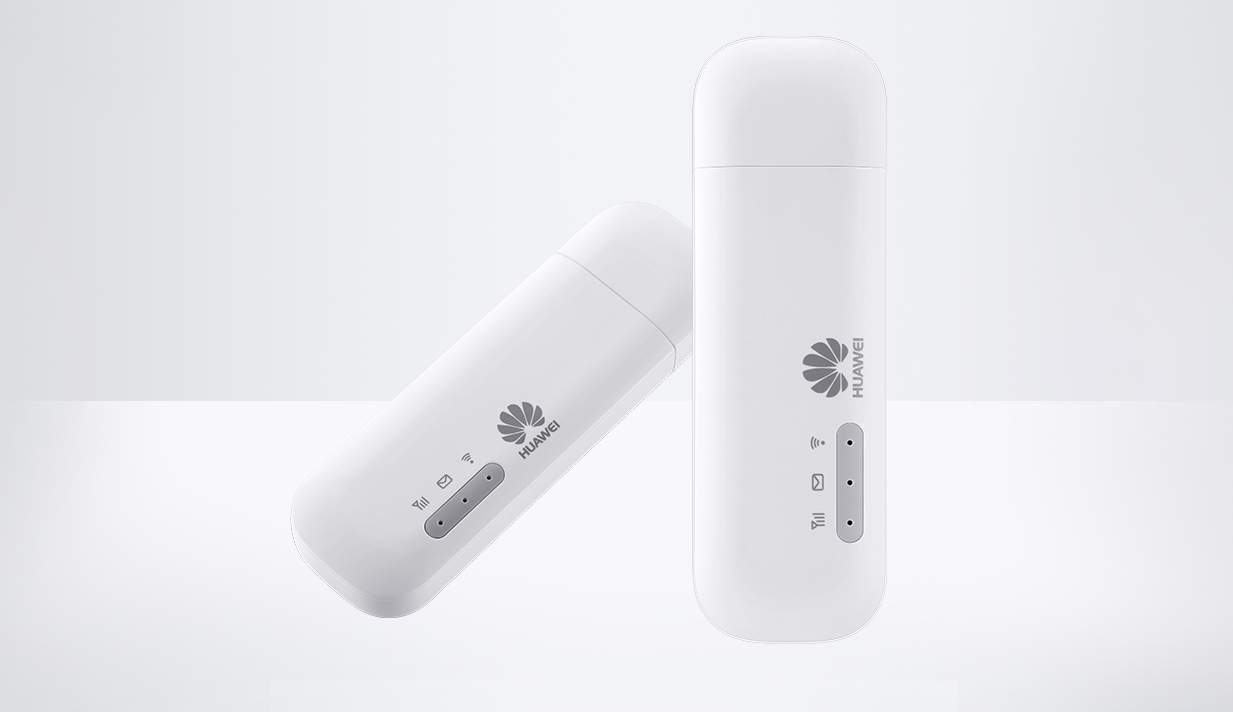 The Huawei E8372 * is a USB stick that is equipped with a GSM / UMTS / LTE modem and can dial into a cellular network using a normal SIM card. In addition, the stick is able to create its own W-Lan network, with which up to 10 other devices such as smartphones, tablets or notebooks can connect in order to get internet access. In addition to the SIM card, the Huawei E8372 * only needs a USB port to supply itself with power.

Since the PIN query of the SIM on the stick can be deactivated itself and the setup is very easy, the Huawei E8372 * is also interesting for less experienced users. Combined with a cheap mobile data tariff or a second card from an existing mobile phone contract, you can get cheap internet access.

The small stick weighs only 40g and is the ideal travel companion or an inexpensive way to equip your car with mobile communications (more on that later). The Huawei E8372 * has two LEDs to indicate the connectivity of cellular networks and WiFi, as well as an LED that indicates SMS or MMS receipt.

The top of the Huawei E8372 * can simply be pushed open. The mobile phone SIM can then be inserted and the micro-SD card can also be installed here in a smartphone-like manner.

The Huawei E8372 * is then set up via the web browser or an app that is available for Android and iOS. We did the setup under MacOS via the web browser. The stick can be reached at the IP address 192.168.8.1, the access data is admin with the password admin. The admin password should be changed immediately after the first login on the stick for security reasons.

The stick offers numerous settings, which most users should not be interested in. Important settings such as the SSID of the WiFi network can be set as well as the PIN query of the SIM card, which can be activated or deactivated. For most purposes it is advisable to deactivate the PIN query, otherwise after restarting the stick you will be prompted to enter the pin, only then may surfing be allowed. This can quickly become annoying, especially for use as a mobile hotspot, especially since the stick's WiFi network should be password-protected anyway. 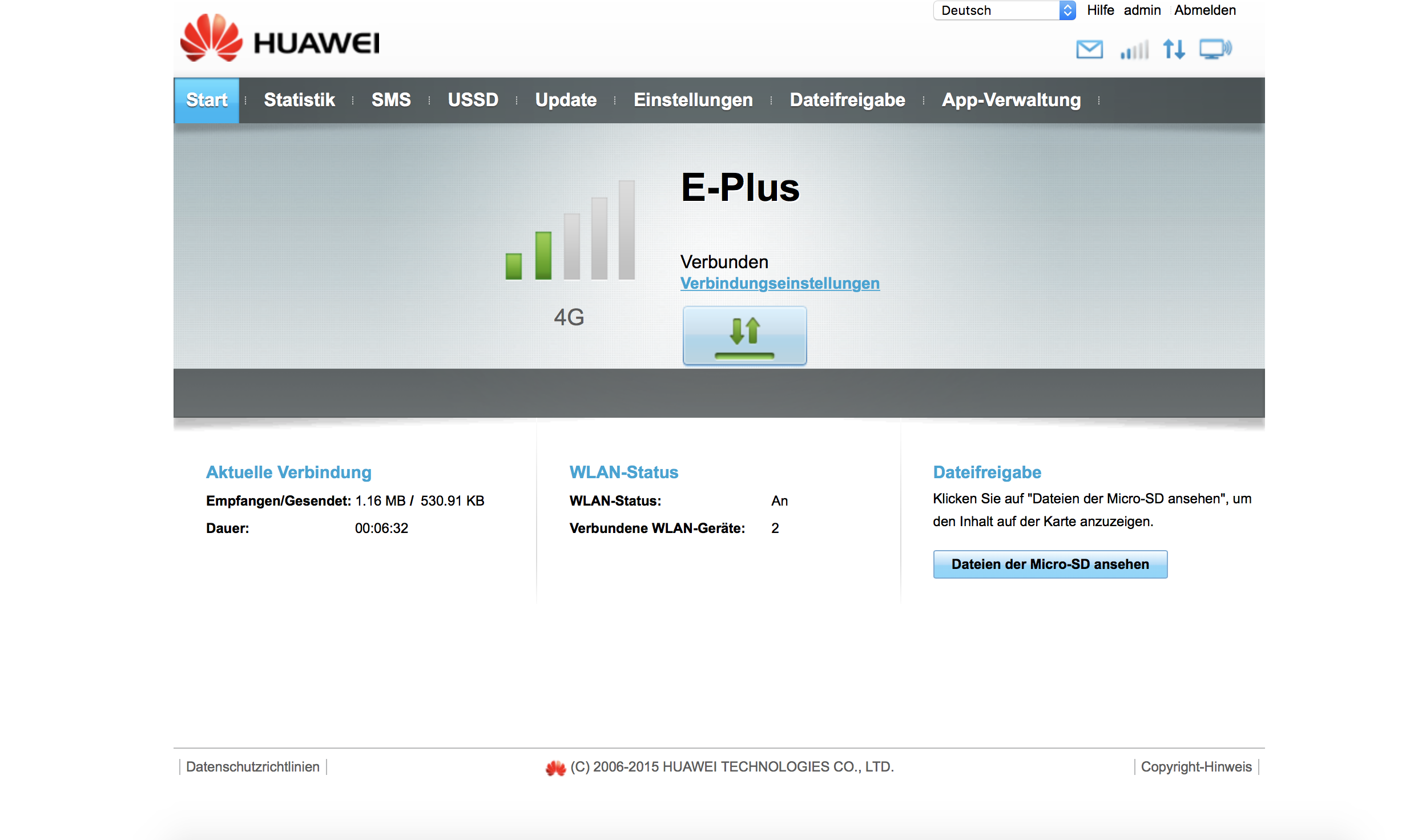 Home page of the web interface 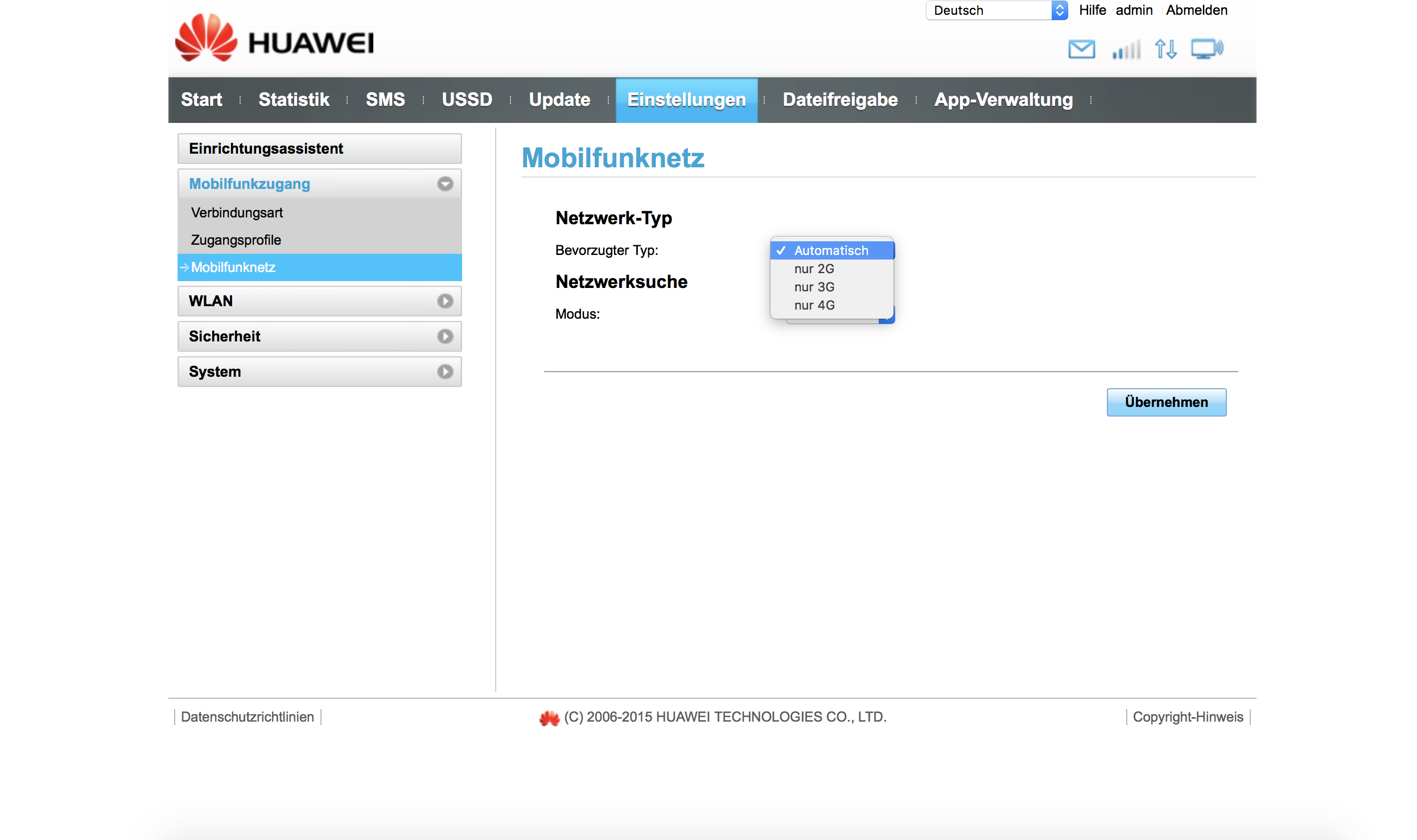 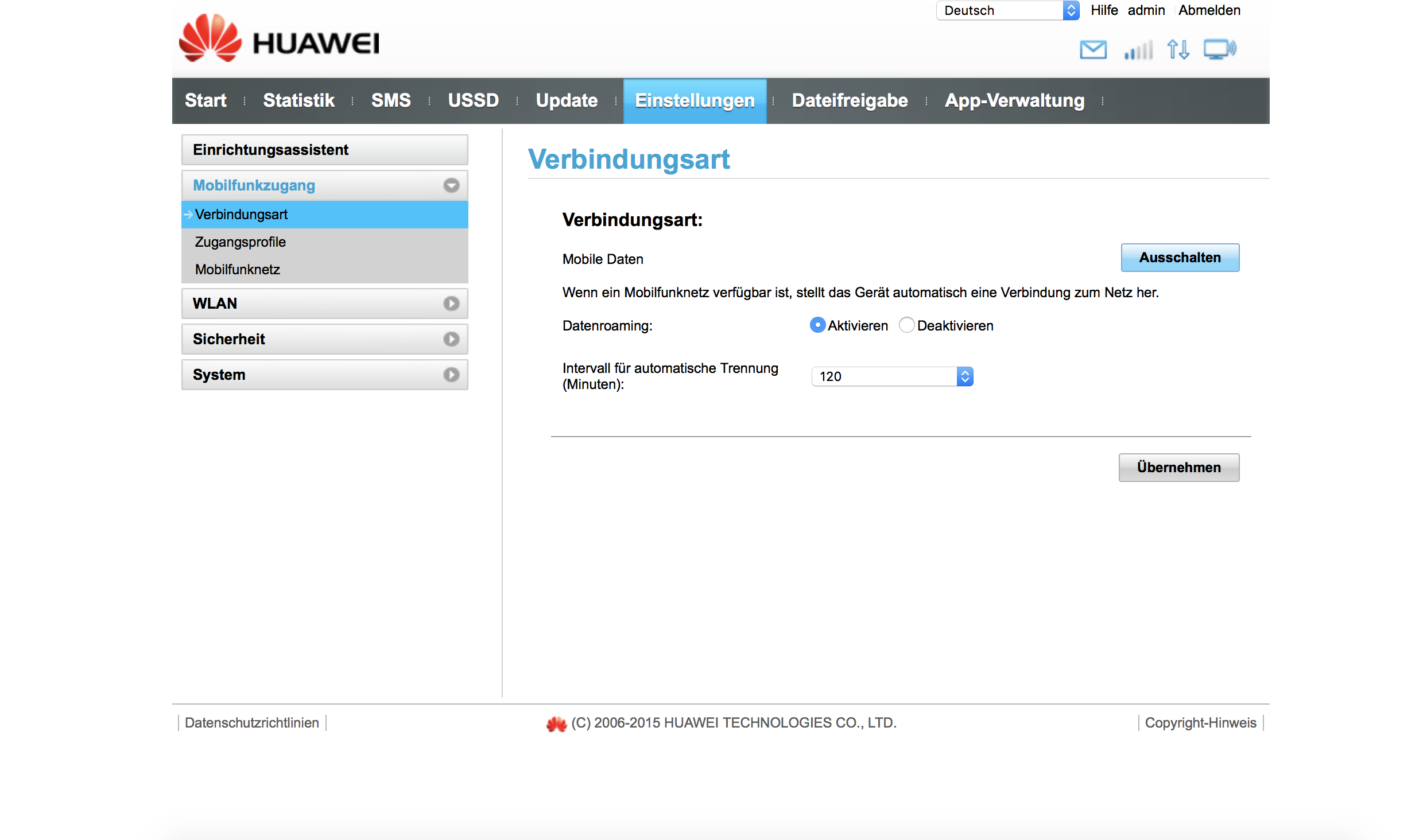 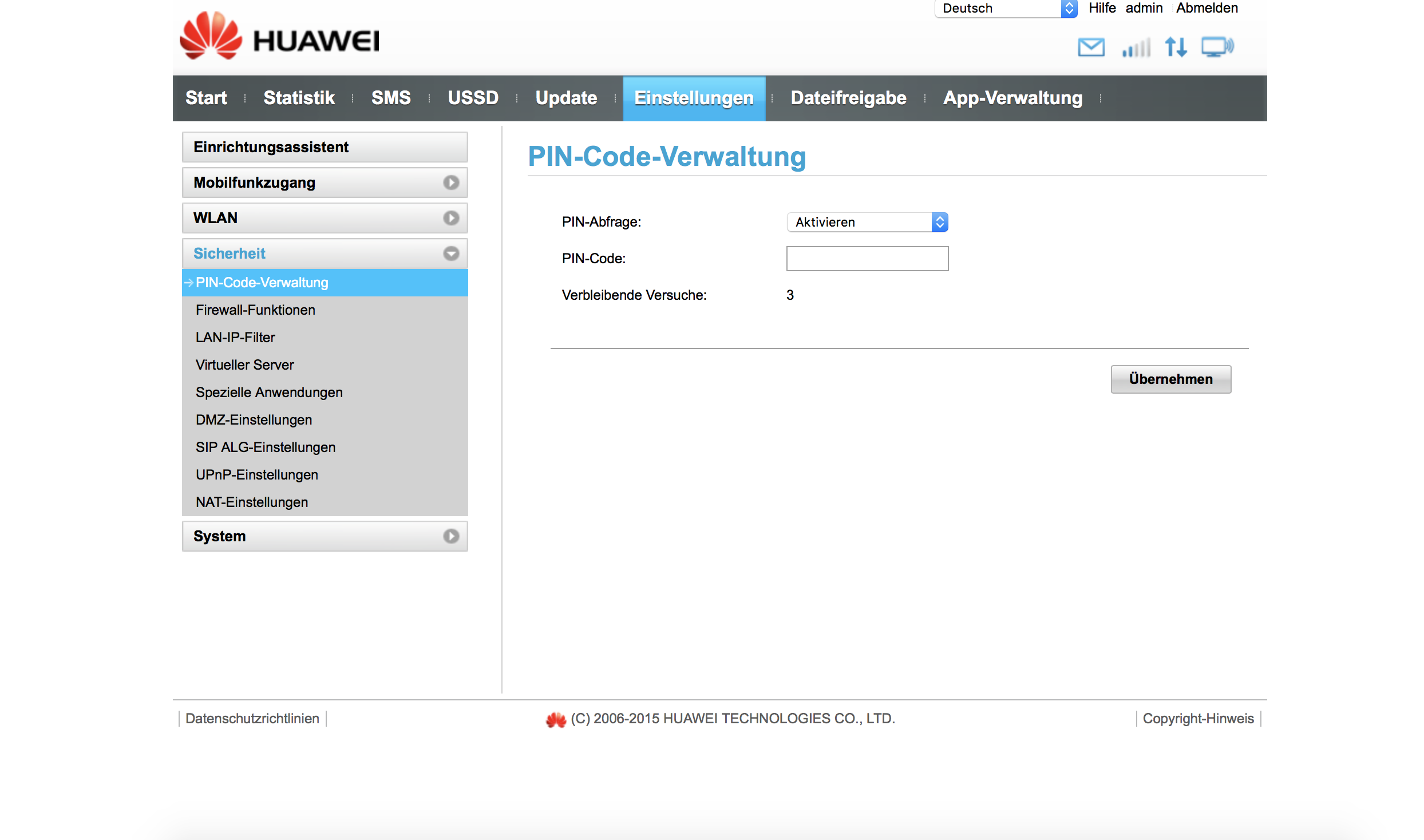 PIN query of the cellular card 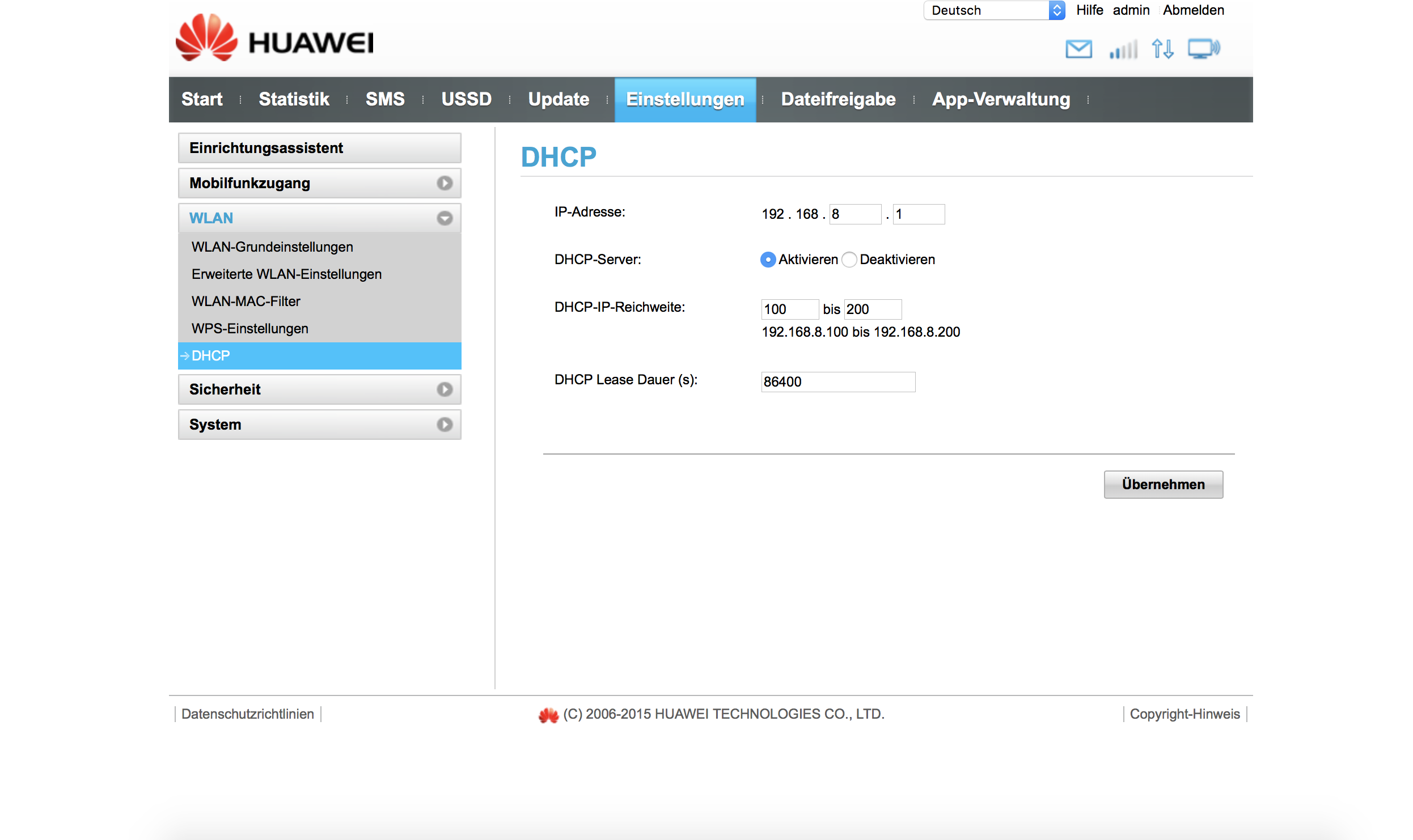 A frequently mentioned area of ​​application for the Huawei E8372 * is its use as a WiFi hotspot in a car in order to be able to use the online functions of the entertainment system. This works for cars from VW, Skoda, Seat, Audi, Peugeot or Hyundai, among others. We use the stick in a Hyundai Ioniq Electric. All that is needed here is a USB port that supplies the stick with power. If the car is parked, the USB port is no longer supplied with power and the stick switches itself off.

When the car is switched on, the USB port is supplied with power again and the stick starts automatically. This takes about 40 seconds, after which the WiFi is available and the car automatically connects to it. In my Hyundai, the traffic situation is displayed (red / yellow / green for the traffic density) or included in the navigation. In addition, fixed and mobile speed cameras are recorded, of which the navigation device can also actively warn. In return, a new speed camera can be reported by pressing a button, the data transfer for this is then also handled via the WiFi or the Huawei E8372 * surf stick.

Note: Speed ​​cameras are only allowed to a very limited extent in Germany. Possession and purchase are permitted, but use is not. In severe cases, there is a risk of an administrative offense, which can be punished with 75 euros and one point in Flensburg. A speed camera warning is not strictly forbidden, because radio stations also regularly warn of speed cameras, but only with an approximate location, so that it is assumed that the driver will keep the speed within the permitted limits on a longer distance. Those who do not want to use the speed camera warning system of the navigation system can usually deactivate this function separately, but some car manufacturers do not allow the warning function to be activated in the first place.

But the Huawei E8372 * can of course also be used very well as a mobile hotspot in hotels, trains or airports. In many cases it can make sense to only take a very small hotspot with you, from which all smartphones, tablets or notebooks can be supplied.

The wireless LAN functions of the Huawei E8372 * are severely limited. The surf stick works with the 802.11 b / g / n standards and is limited to channels 1-7 in the 2.4 GHz network with a channel width of 20 MHz. Normally WiFi devices transmit in the 2.4 GHz network with 20-40 MHz and can use 13 channels. The Huawei E8372 * does not support the newer 5 GHz network at all. A maximum of 10 devices can connect to the 150 Mbps fast W-Lan at the same time. Since the stick is intended for mobile WiFi and Huawei has also optimized the stick's energy consumption, the limitations are forgivable. At least the WiFi can be encrypted via WPA2-PSK in keeping with the times. 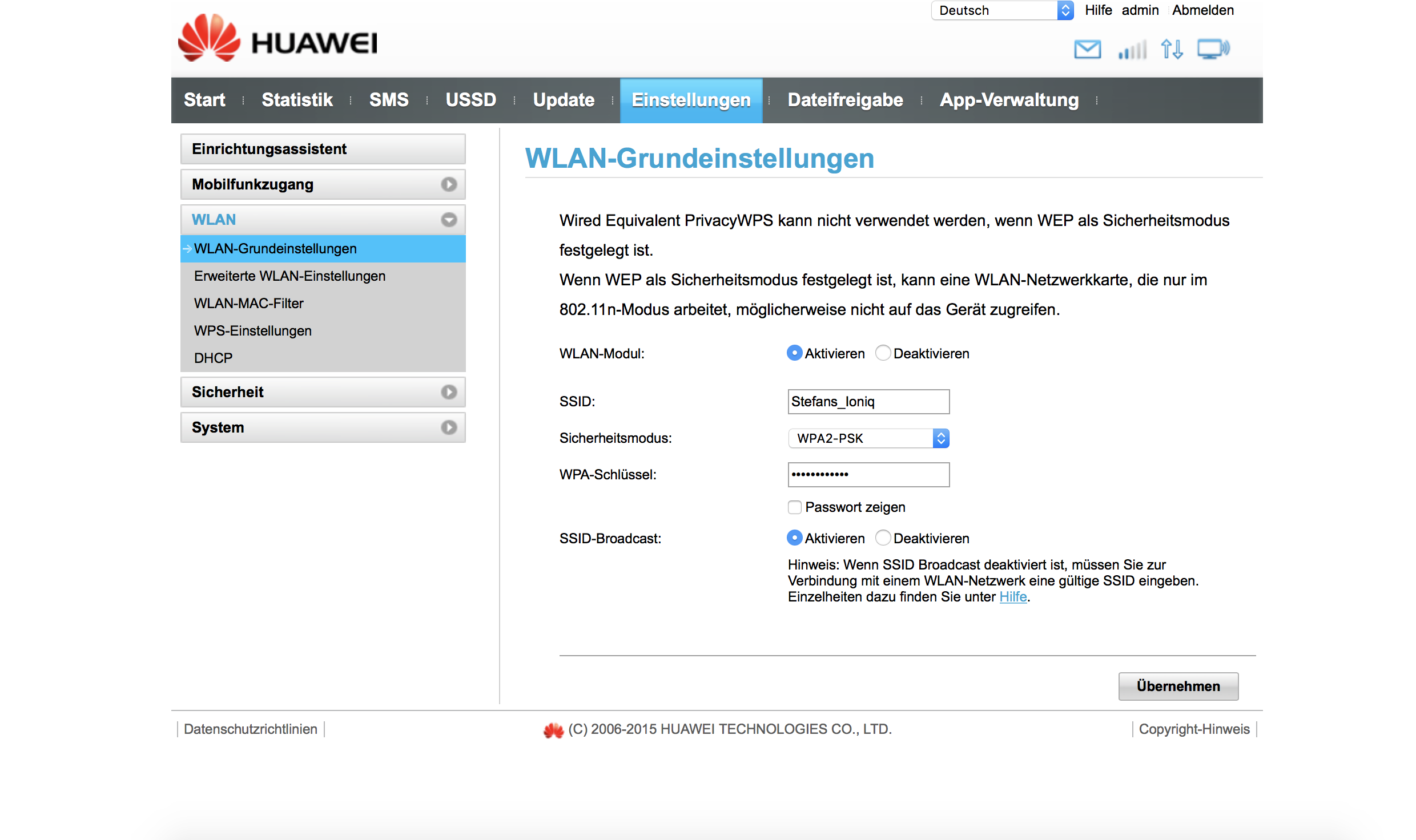 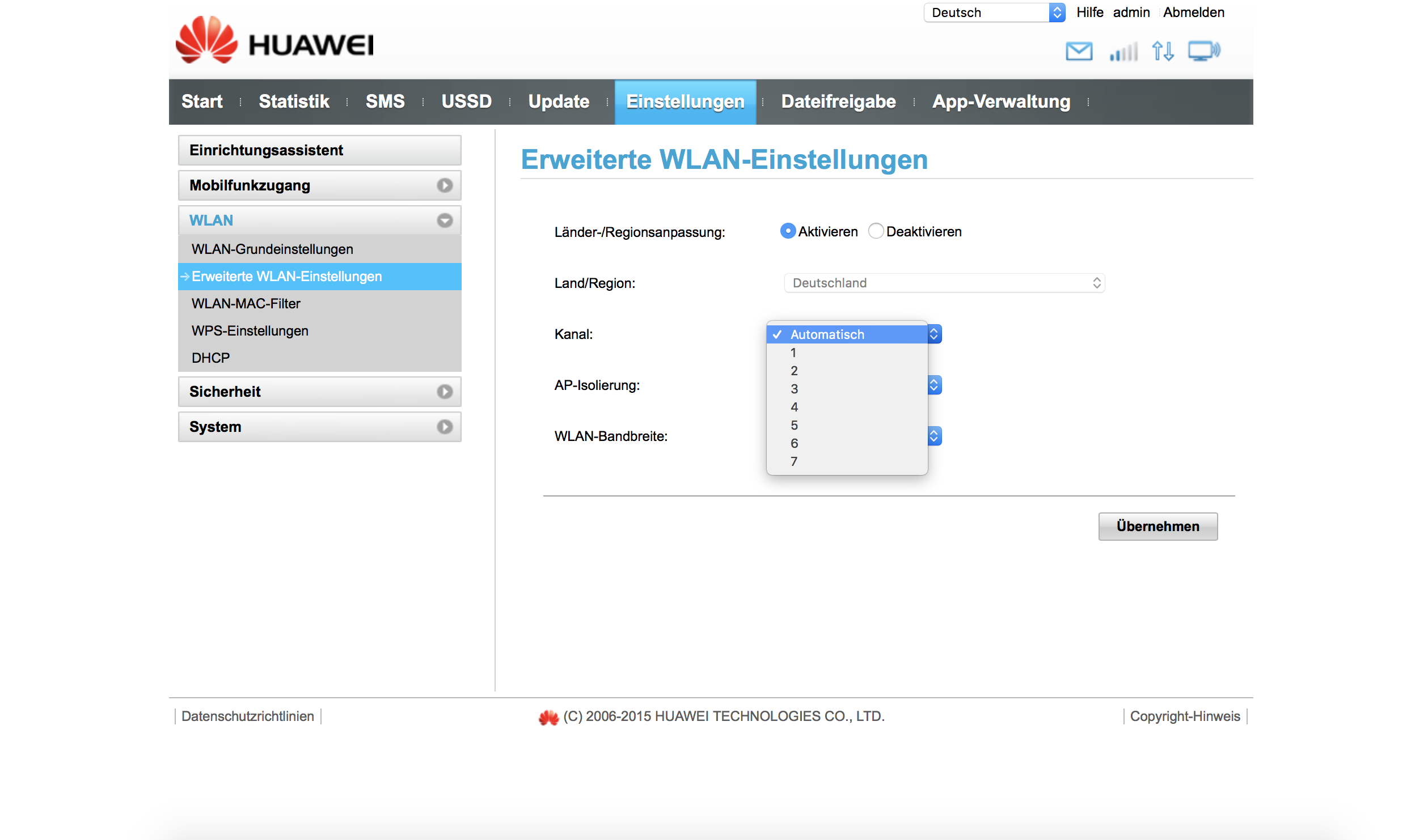 The new IPv6 network protocol is also not supported. This should hardly be a disadvantage for private users, because most of them will use the older IPv4 protocol at home anyway.

We performed our WiFi benchmark with two Apple MacBooks running the current macOS version 10.13.5 and the WiFiPerf software. Several data packets are transferred between the two test devices via the WiFi over a period of 2 minutes, thus determining the speed and stability of the WiFi. 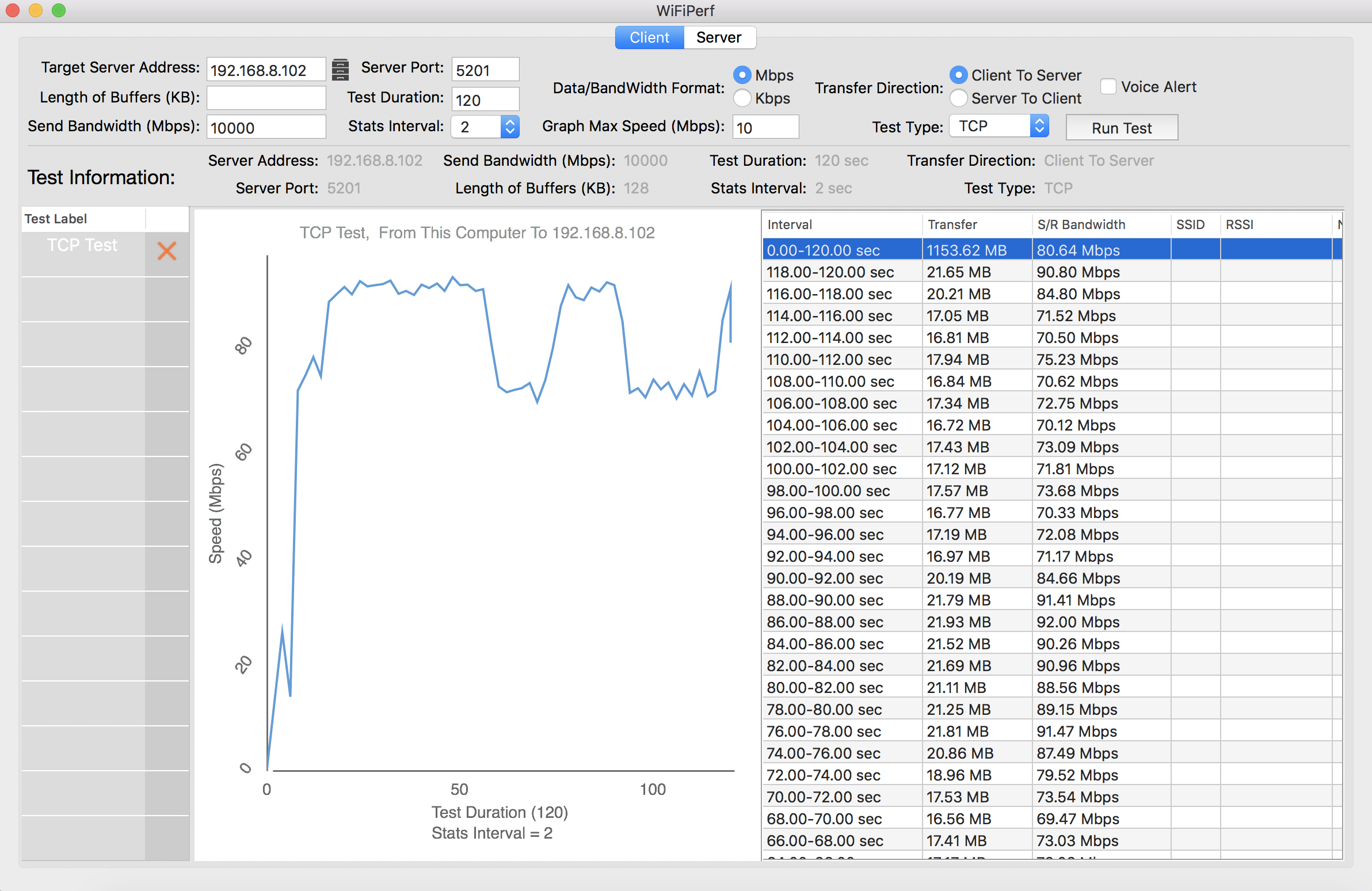 On average, we exchanged files between the devices at just over 80 Mbps (approx. 10 MB per second). The devices were about 1 meter apart. The transmission rate is therefore easily sufficient for music or video streams. With the WiFi Signal software, we also measured the signal quality in motion: it is stable within a radius of 5-10 meters. 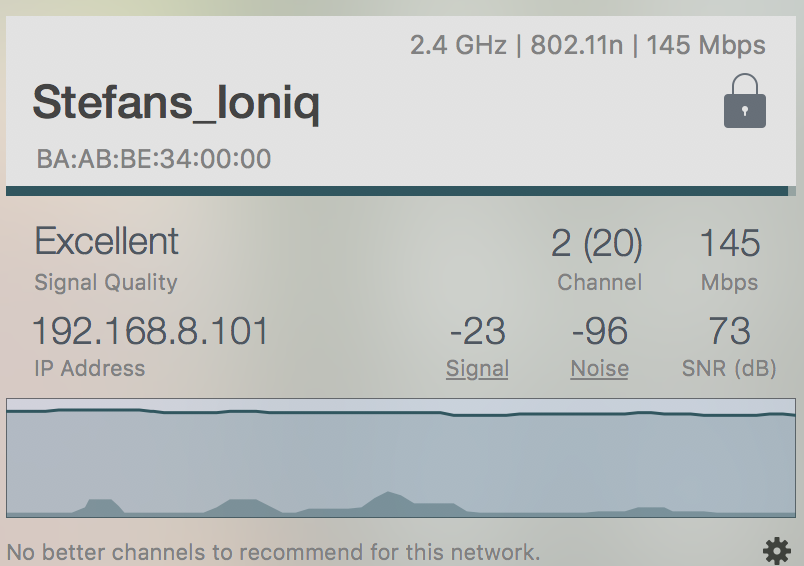 The Huawei E8372 * has a modem for GSM, UMTS and LTE. All modern LTE frequency bands are supported, including band 20 (800 MHz), which is important in Germany and which is often used, especially in rural areas. The stick uses a normal SIM card and does not yet use the newer micro or nano SIM form factors.

I use the 500 MB prepaid data tariff Internet-S from ALDI TALK (O2 / E-Plus network) with LTE and EU roaming. This can be canceled monthly and costs 4 euros. The credit can be automatically withdrawn by direct debit, so that you don't have to worry about topping up yourself.

Netzclub even offers a completely free 100 MB prepaid SIM that is financed through advertising via SMS. Since you can simply ignore the advertising SMS on the stick, this tariff actually has no disadvantage apart from the low data volume. However, the LTE network is not supported, which means that reception can be worse compared to an LTE tariff. For some applications, such as use in a car, 100 MB per month is sufficient. 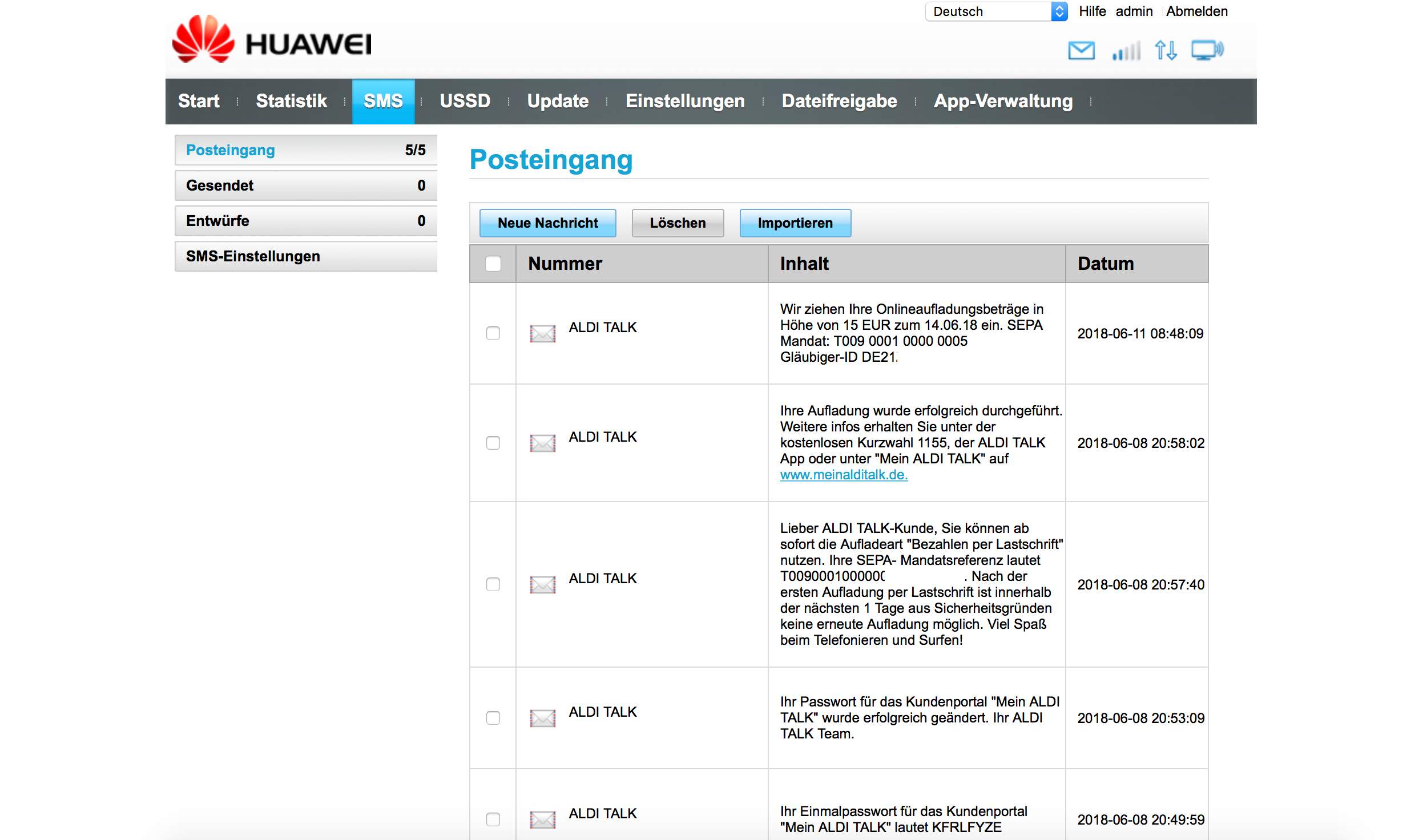 The monthly amount of data available can be set in the web interface of the surf stick. The stick then shows a consumption indicator for the contract volume. A day can be selected on which the consumption meter should be reset (e.g. always on the 1st of the month). 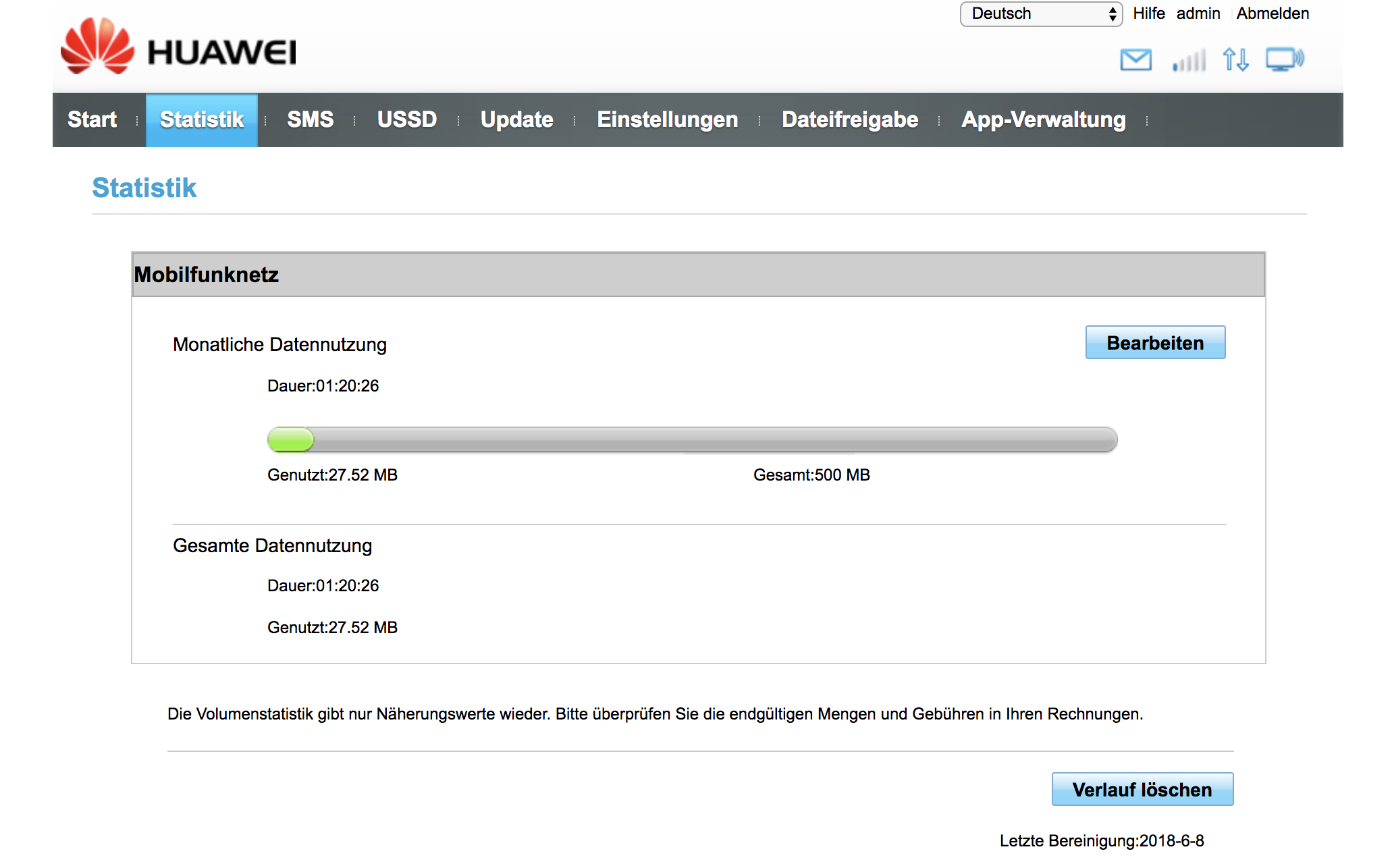 The Huawei E8372 * has antenna connections for the cellular modem to improve reception. However, these antenna connections are very vulnerable and only certified for a maximum of 10 plugging and unplugging processes. Since the reception has hardly improved, I would refrain from using it. As already written, the UMTS / LTE reception of the stick is good without an additional antenna and not worse than with a smartphone (I compared the reception with an Apple iPhone X).

The Huawei E8372 * has a micro-SD card slot that accepts micro-SDHC cards with a capacity of up to 32 GB. The memory can be made publicly available via USB or via the web interface and can be used for data exchange between the devices themselves or, for example, as a source for music, videos or images. 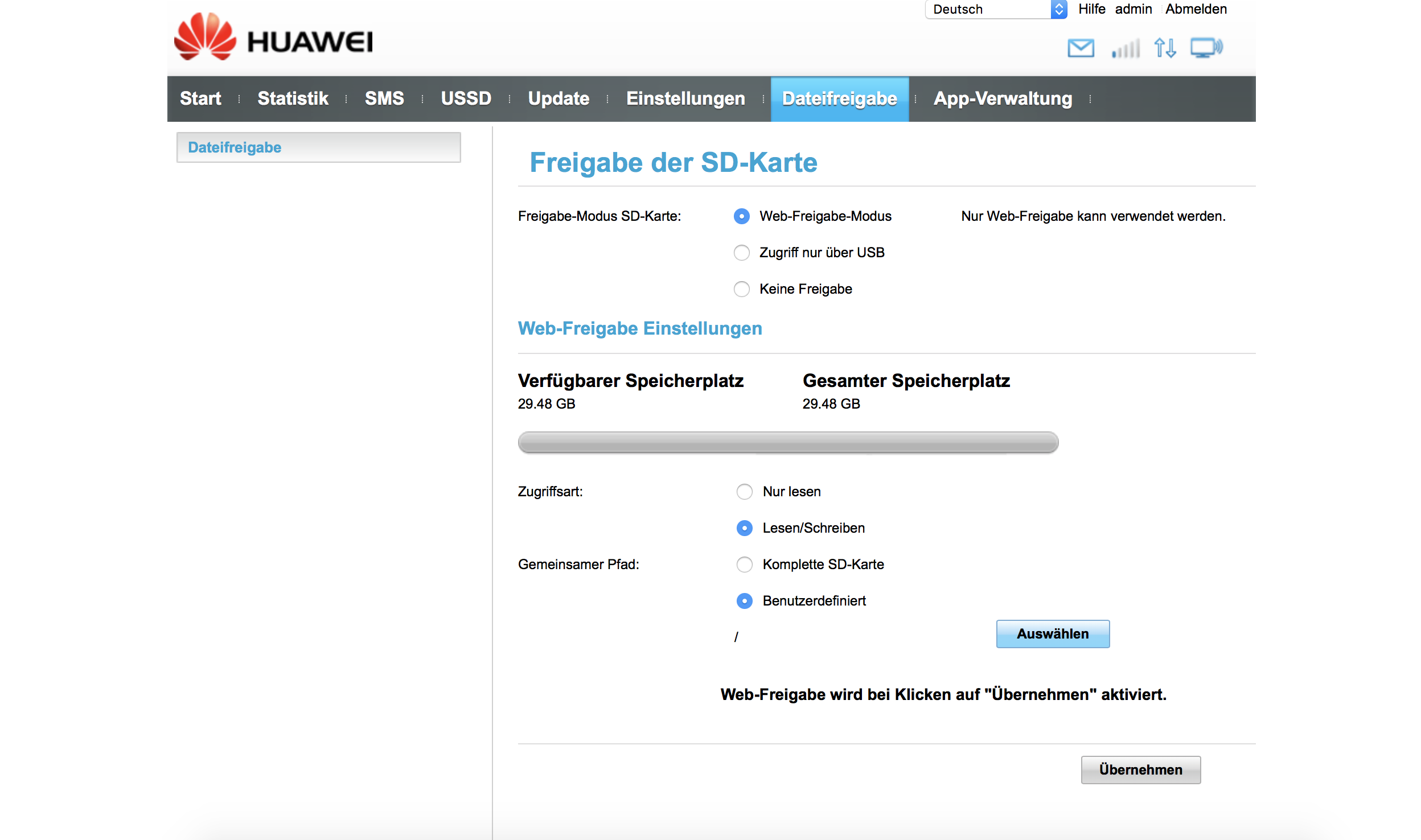 In web sharing mode, files can easily be uploaded, downloaded or deleted via the web interface. It is also possible to create directories. The administrator can also determine whether files can only be read, changed or deleted.

In addition to the strong Wi-Fi limitation, the Huawei E8372 * surf stick also has an annoying kind of thing: Huawei has given the stick an automatic energy-saving mode that deactivates the stick if there is no Wi-Fi device in the last 30/60/120 minutes (adjustable) connected to the stick. Normally, this single energy saving mode does not work because active devices such as smartphones regularly exchange data with the stick.

As a stationary solution in a hotel, however, this function can be activated, e.g. if the smartphone switches to do not disturb mode overnight, where it does not send or receive any data. If the stick switches itself off automatically, you have to unplug it in the USB port and plug it in again so that it starts again. For us it is absolutely incomprehensible why this energy-saving function cannot be completely deactivated.

When using a multi-SIM card with an existing contract, it should be noted that the Huawei E8372 * works in the so-called circuit switching mode, i.e. does not log on as a pure data stick, but also accepts calls and SMS. Calls to your own cell phone number may then be diverted directly to your mailbox. I cannot say whether this behavior is the same for all mobile phone providers.

The Huawei E8372 * is a real energy saver. The stick only needs an average of 1.0 watt in active mode. During a transmission, the consumption can rise in peaks to 2-3 watts. Due to the low consumption, the stick also works on a power bank or a small smartphone charger. 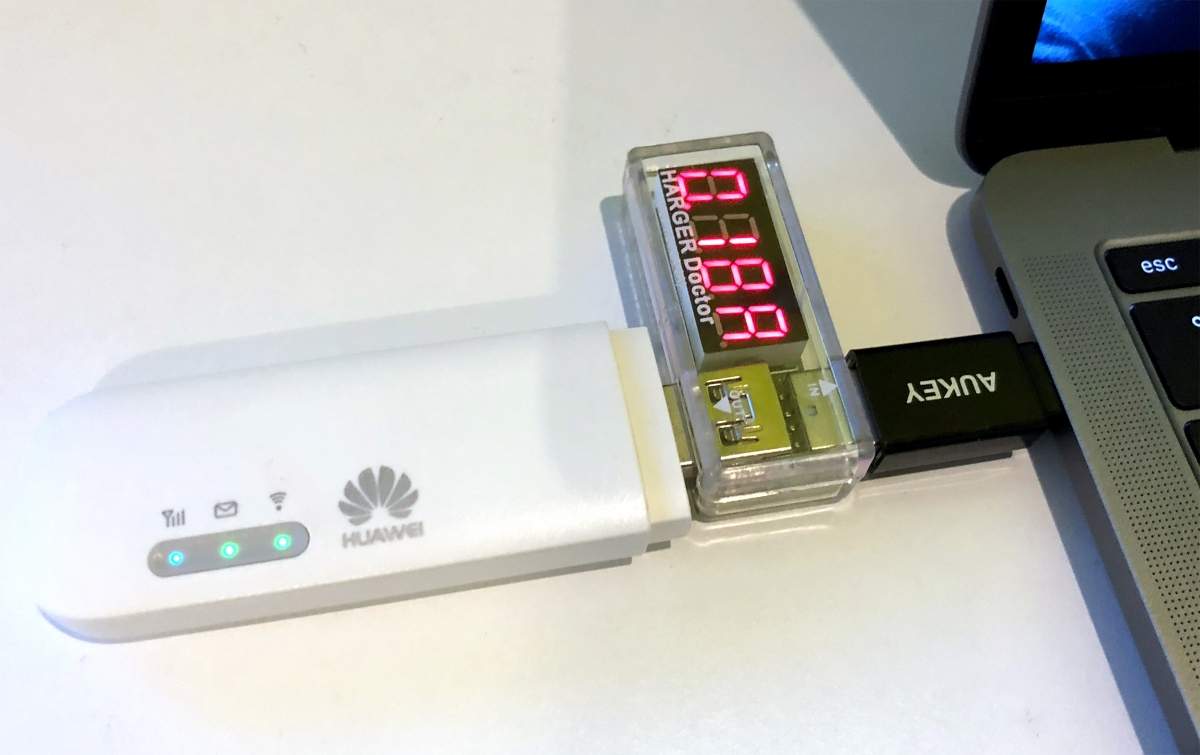 As a mobile WiFi hotspot, the Huawei E8372 * can be used without any problems, provided you can live with the restrictions of the surf stick. For me, however, the Huawei E8372 * can use its full potential especially in special applications, for example to enable online functions in a car. Due to the simple setup, the surf stick is also recommended for less experienced users.

Attention: the Huawei E8372 * is offered by many middlemen as an import from other countries. These imports usually have a restricted or modified web interface for managing the stick. In addition, these sticks are often equipped with so-called Netlocks, which prevent the use of a German SIM card. We therefore advise you to only buy the stick from a trustworthy dealer.

As an alternative to the Huawei E8272, you could use the portable but much larger TP-Link TL-MR3020 * router to which a surf stick such as the Huawei E3372 * can be connected. This combination can also start automatically as soon as power is provided via a USB port. In terms of price, this is on par and with the TP-Link TL-MR3020 * you have some setting options regardless of the surf stick. But this combination is significantly larger and heavier.

Links marked with a * are affiliate links, for which we receive remuneration from the provider for a purchase.