Why India Doesn't Participate in Athletes

Petrissa Solja: "I think mixed teams are up to date" 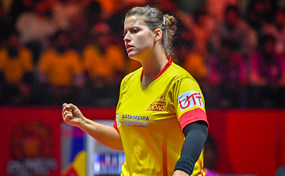 August 19, 2019 - Petrissa Solja returned to Germany last week as "Ultimate 1", i.e. the best player in the Indian league "Ultimate Table Tennis". In an interview, she tells us what excites her about the league, why there is such ambition in the team to win even though this has no influence on the world rankings, and which of the innovative ideas she could also imagine for the German league system. She likes the mixed teams best.

myTischtennis.de: You are "The Ultimate 1" - the best player of the third season of Ultimate Table Tennis (read the article). And that in a league in which there were many players who are currently in front of you in the world rankings, and of course many strong men. Do you only let yourself be called "The Ultimate 1" privately or what does that mean for you?

Petrissa Solja: It is an incredible honor to be recognized as the best among the many top players. The tournament was really very well attended. There was a gold cap as a trophy. This will have a place of honor in my home. Unfortunately, the trophy is not real gold. At the airport control, the 'golden cap' caused astonishment among the security officers. So far I'm not called "The Ultimate 1", but maybe that will come. At our next home game of my club TSV Langstadt, I could well imagine that those responsible would come up with something crazy at the introduction or at the entrance, they are always very creative.

myTischtennis.de: In the individual you played 4: 3, but at UTT the sentences are decisive and that was 13 that you got for the Chennai Lions. In addition to the many points you made in mixed! In which game were you particularly happy with yourself and why?

Petrissa Solja: I think I played my best games in the final. Here I played against Bernadette Szöcs in the singles and won 2-1. I was very dominant in the first two sets and had a 4-1 lead in the third set. Then I wanted to win the third set too badly to give my team, the Chennai Lions, a perfect start to the final. I then just lost the third set. Even in mixed, which I played with Sharath Kamal (Achanta, editor's note), we improved from game to game and were able to win all seven games. Here, too, we had our best game in the final: We were able to win 3-0 against Bernadette Szöcs and Sathiyan Gnanasekaran, who, like us, had won all mixed games in the entire tournament. The 3-0 success is all the higher for us. We really worked perfectly in the final. What was special for us was that after the 3-0 mixed match, we won the overall 8-1 win and thus won the final.

myTischtennis.de: That was your second time in Ultimate Table Tennis. That already shows that you seem to like it a lot there. What do you like about UTT?

Petrissa Solja: There are various reasons. On the one hand, India is a very fascinating country. There are many temples and markets to marvel at. I have now also visited the Taj Mahal for the second time. The people are incredibly nice and hospitable. It is amazing how many of the people here can get by with few resources and still lead a contented life. Here you can definitely learn something for yourself at home. In addition, the tournament is organized very professionally. We try to fulfill every wish for us players. The UTT has managed to generate a lot of attention in India. Every game is broadcast live at prime time on Indian television and millions of people are watching in front of the TV sets. The draft system in the run-up to the season, in which the teams choose their picks, also means that almost every team appears to be equally strong on paper and is therefore often incredibly tight. Many games ended 8: 7. This guarantees tension right up to the last second. Both semi-finals, for example, ended 8: 7 and the last set was decided with the golden point. There is no more tension.

myTischtennis.de: From the outside it looked like you were having a lot of fun. Was that really the case? Why is there such a team spirit?

Petrissa Solja: It's really crazy. The Indian league has no influence on the world rankings. Even so, every athlete who takes part is keen to win the Ultimate Table Tennis League. In my opinion, this is because those responsible within the teams are so euphoric about it. The spectators also go crazy at every point. It's just a lot of fun to play there. I have even more fun winning. We had a great atmosphere in the team this year. I immediately got on well with my teammates Sharath Kamal, Tiago Apolonia and Madhurika Patkar. We also had a very good coach, Peter Engel, who is very familiar with India due to his many years of experience as an Indian national coach.

myTischtennis.de: Could you imagine the system with the sets that count for the table and the golden point for the Bundesliga as well? Or do you prefer the traditional mode?

Petrissa Solja: I think the system from India is very innovative and above all I find it exciting for the audience, because every sentence counts. The Golden Points also provide some magical moments. I find it fascinating when you are 2-0 down and win the third set, then you celebrate winning one set insanely, even though you actually lost the game. It's really funny, because as an athlete, all that counts is victory, regardless of the height. It's completely different in India. What I like best, however, is the mixed teams, consisting of men and women. This has been around for a long time in other sports such as badminton and this mode is very popular with spectators there. Nowadays I would think that's timely, because mixed is currently a special focus due to being part of the Olympics.

myTischtennis.de: Many of your colleagues use this time of the year for vacation. Why did you decide to get involved in India?

Petrissa Solja: I had the opportunity to gain great experience with the Indian league two years ago. That is why it was clear to me relatively quickly when I was asked to take part again. For me, the Indian league was also a great opportunity to prepare for the upcoming Bundesliga season and the upcoming tournaments. Because I was able to train with many different training partners. So I also had the opportunity to play a few training sessions with my teammate Tiago Apolonia. Of course, sightseeing was not neglected either.

myTischtennis.de: There is now about a year until the Olympics and you are in good shape. Will we see Petrissa Solja in three competitions in Tokyo?

Petrissa Solja: I hope so. Ultimately, however, the decision rests with the German Table Tennis Association. We are in the great situation that we were able to qualify in the team competition with our first opportunity (winning the European Games in Minsk) and thus, in addition to starting as a team, we will also have two starting positions in the individual. The DTTB decides who receives the two individual seats. In my opinion, Han Ying should definitely be seeded, as she also qualified in the individual at the European Games. I hope that I will get the second single starting place next to her. I definitely start in the mixed doubles, together with Patrick Franziska. I would like to represent my country Germany in all three competitions and I promise to do my best, as I always try.