What are the limits of duct tape

X-ray with a roll of scotch tape

It works - but only in a vacuum, but it works! - If the tape is pulled off the roll, a weak X-ray radiation is generated.

So you don't necessarily need an X-ray tube if you want to X-ray your finger in an emergency! A vacuum pump and a roll of scotch tape are sufficient for this. Because if the adhesive tape is rolled off quickly enough, it emits light and X-rays. Researchers could even use it to x-ray a finger.

The finger bone was clearly visible on the X-ray. The radiation required for this did not come from an X-ray tube, but from a simple roll of adhesive tape. American physicists only had to pull off a long strip fast enough: at about three centimeters per second. As they report in the journal "Nature", an effect known for decades known as triboluminescence is responsible for the emission of X-rays.

"The intensity of the X-ray triboluminescence is sufficient to record X-ray images," write Carlos G. Camara and his colleagues from the University of California in Los Angeles. However, they had to unroll the glue roll in a vacuum chamber to scan a finger. At least visible bluish light could still be observed under normal pressure.

For their experiment, they placed a standard roll of adhesive tape on a rotating shaft and unrolled it evenly with the help of an electric motor. Using an X-ray detector, they recognized that the energy-rich rays flashed once or twice per second for only a few billionths of a second. These flashes achieved a maximum power of up to 100 milliwatts.

This phenomenon was first observed on adhesive tapes as early as 1953. Even with the new precision measurement, the physicists cannot yet explain it conclusively. Because the van der Waals forces, which are responsible for the adhesive effect, are actually a hundred times too weak to be able to provide enough energy for the X-ray flashes.

According to the researchers, the most likely explanation is as follows: When peeling off, the unrolled strip with the adhesive side charges positively and the rest of the roll charges negatively. This creates an electric field that is strong enough to allow a discharge between the two poles. In a vacuum, this discharge accelerates electrons that are located between the surfaces and release their energy in the form of X-rays when they pass the positively charged side of the strip. So far, however, the researchers have not been able to say where the limits of x-raying adhesive tape are. They suspect, however, that other systems are also capable of similar bursts of energy.

However, a cheap X-ray source for home use or for use in developing countries is not to be expected anytime soon. But the scientists want to investigate the mysterious X-ray flashes even further and expect that similar - perhaps more intense - triboluminescence can also be achieved with other materials.

The attempt in videos: 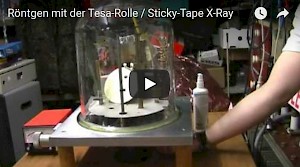 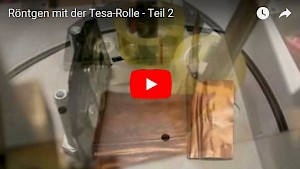