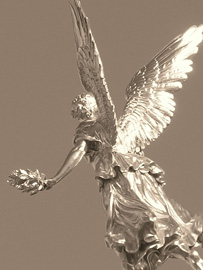 The contact with angel energies is described as beneficial and supportive. Those who commit themselves to this path not only experience more ease in life, but always have their personal happiness trainer at their side.

"Angels soar down and bring from heaven the echo of grace and the whisper of love."
Fanny J. Crosby

Dealing with the subject of "angels" opens up a fascinating and at the same time extremely helpful world. In all religions and cultures there are traces of beings who take on a mediator role between heaven and earth. We find testimonies of angels among the Indians, Hindus, Egyptians, Persians, Jewish Kabbalists, Christians, Muslims and Buddhists. In the Bible there are only three angels called by name: Raphael, Michael and Gabriel. The angels of the Bible act as messengers of messages, protectors, or praise the glory of God. The word angel comes from the Greek word “angelos”, which means something like messenger. Many angels were banned from the Bible by the Roman Catholic Church, such as the Archangel Uriel. The book of Enoch, which is not recognized as sacred by the official Christian Church, contains many accounts of angels.
Muslims believe that the angel Gabriel Mohammed dictated the Koran. In addition, the writing angels play a major role in this religion. One sits on the right, the other on the left shoulder of the person. The one on the right writes the good deeds, the one on the left the bad ones.
We find the most extensive system of angels in the Kabbalah. The traditional angel teachings like that of the Kabbalah, however, require years of study. The traditions found important further developments through theosophy and anthroposophy. The esoteric angel teachings refer to parts of these traditions that are often similar but differ in details.

Angels are not only the sweet and tender beings, but also have very powerful energy and a strong radiance of light. The following description from the Bible, John Revelation 10, may serve as an example: “Then I saw another mighty angel come down from heaven. He was surrounded by a cloud and a rainbow stood over his head. His face shone like the sun and his legs were pillars of fire. Holding a small open scroll in his hand, he put his right foot on the sea and his left foot on the mainland. His voice boomed like the roar of a lion and with a loud cracking seven thunderbolts answered him ... "
The shepherds in the Christmas story were also afraid of the angels because they were blinded by their shining light. Sometimes angels are also quiet and move in silence up and down the ladder to heaven, as in Jacob's dream. This ladder represents a beautiful picture for the essence of angels: connection to God in both directions from earth to heaven and from heaven to earth.
Angels change their appearance and energy as they are more a conduit for divine intentions than free individual beings. To some they appear as colored energy, to some as blindingly bright light. Colors indicate the name of the angel, as the archangels are assigned certain colors. To some people they appear in human form. The wings in the angels could be interpreted as a sign of their speed. Many representations are kitschy according to current taste criteria. This is due, among other things, to the strong colors and abundance of light of the angelic visions or the chubby character of baroque representations. This childliness is supposed to indicate the purity of the angels. If you look at them with a child's eye, their wonderful beauty reveals itself.

Different types of people can come into contact with angels in different ways. That is why various channels are activated in the angel intuitive trainings in order to give everyone access to angel experiences. Angel contacts happen mainly through clairvoyance, clairaudience / gut feeling, clairaudience, intuition / clairvoyance.
Most people have a personal strength in one of these areas. We humans are made to receive energetic messages. The only problem is that we are surrounded by many doubts. Therefore, it takes practice to trust these messages. The logical mind stands in our way, intuition, settling in and silence are beneficial. The French use the expression “Fitting” when there is a pause in an intense conversation. In such moments we can feel the silent presence of the angels.

How angels help us

Angels give us guidance. We just have to feel their impulses and signs. Through intensive work with the angels, we learn to perceive them better and better. The energy of the angels is very light and has nothing to do with the arduous search for enlightenment. People who are on the spiritual quest sometimes tend to neglect the physical as low energy. People who go on the angelic path love everything sensual and see the material as an expression of the divine.
Angels inspire to change one's own life effectively and bring the seeker into harmony with his destiny. The earthly is not devalued, but the search for happiness on earth is supported by the angels. Fairies and elves, gnomes and mermaids are also important helpers of angelic power. They create the connection between humans and nature and care for the environment.
Angels have great healing powers. Through their love they give a feeling of security, yes, a feeling of home. Working with angels is like arriving at home. Your messages are always loving. They free us from the supremacy of the analytical mind and strengthen our confidence in life. We get into a higher vibration level and our environment gets into resonance with it, so that we not only dream of another life, but also get the strength to live these dreams.

Many thanks to everyone who has supported SEIN's journalism so far.
The support of our readers helps ensure that we retain our editorial independence and that we can continue to express our own opinions. We are sure that our editorial work and our diversity and depth of topics will stimulate social change. We need your support in order to continue to deliver good, creative "solution journalism" and to maintain our openness. Every reader contribution, large or small, is valuable. If you appreciate our work, support SEIN today - it will only take a few minutes. Many Thanks.