Corn is a GMO in the US

The EU brings up the rear when it comes to cultivation. Nevertheless, through the high import of GM feed in particular, it promotes global genetic engineering cultivation. 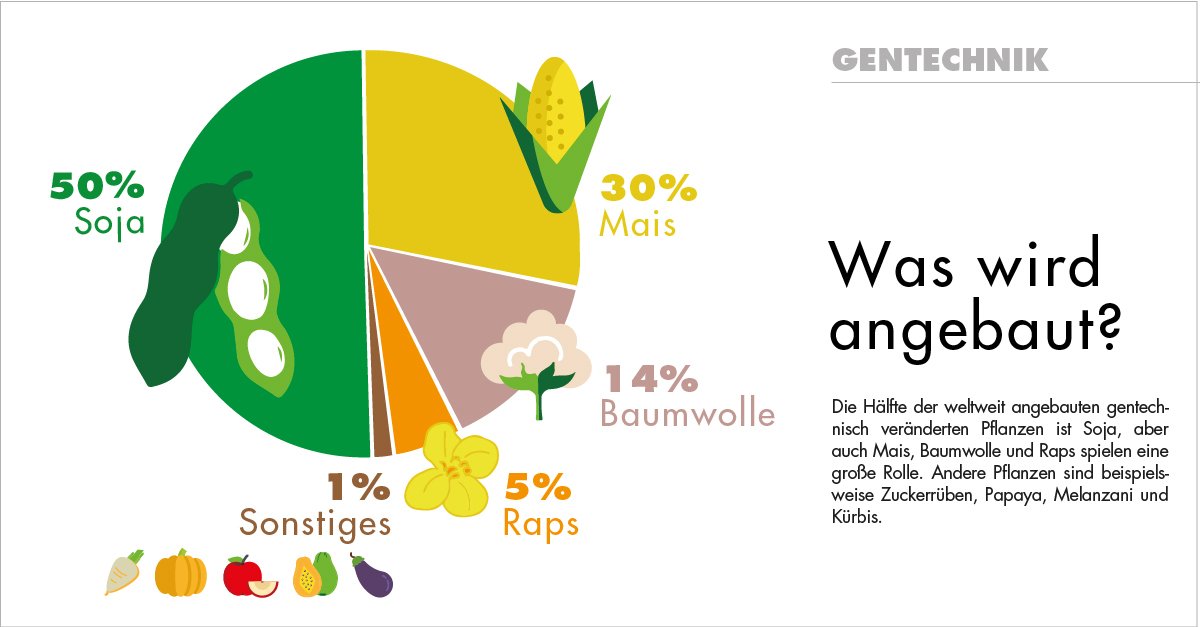 Here you can find a map with the genetic engineering growing areas of the world:

Genetic engineering began its triumphant advance from the USA in the 1990s. The first large areas of genetic engineering (GM) soy were grown there and exported to Europe as animal feed. Around 94 percent of all soybean cultivation is currently genetically modified. The most important crops are next to soy, maize, rapeseed and sugar beet. Of these, between 90 and 95% are genetically modified. Recently, however, fruit and vegetables have also been changed for the North American market - apples, potatoes, pumpkins, papaya. In 2015, two GM apple varieties were approved for cultivation and sale. Their characteristic: they do not turn brown at the interfaces. Smaller quantities of GM papaya and GM pumpkin are also grown. The situation is similar, if not quite as bad, in Canada. Many approvals from the USA are simply adopted in Canada. There are also large fields with GM plants.

Argentina and Brazil in particular have long been used to meet the huge demand for animal feed for meat production in industrialized countries. In Argentina, 100 percent of soy cultivation has been genetically modified since 2016, with devastating consequences for the population and the environment. Even smaller countries like Paraguay are already affected by the massive expansion of genetic engineering.

In the meantime, the use of genetic engineering has spread around the world. In India, it was the cotton producers in particular that caused an international stir. Cotton is an important source of income for the rural population in India. In recent years, farmers have been pushed more and more to grow GM cotton with the promise of higher yields. But the success only lasted for a short time. Over 94 percent of Indian cotton is now genetically modified. GM cotton was also grown in Burkina Faso. But here the resistance of the producers against the genetic engineering seeds increased. In the meantime, the West African country has banned cultivation again. The Ethiopian government has allowed the cultivation of genetically modified cotton and maize. Field trials with GM cassava are to start in Kenya, where genetically modified cotton has already been sown for the first time. But even in these East African countries, civil society is defending itself against the genetic engineering course of their governments.

There is little information about the actual cultivation situation worldwide. Official figures are usually only provided by the industry-related ISAAA (International Service for the Acquisition of Agri-biotech Applications).

If in America it is mainly the feed crops, in other parts of the world the switch to GM food crops plays a bigger role. Whether Bt Brinjal melanzani in Bangladesh or potatoes in the Philippines, the genetic engineering companies keep trying to get their GM vegetables into circulation.

The most widely grown GM crops in the world are soy, maize, cotton, rapeseed and sugar beet. In addition, experiments are being carried out with genetically modified eucalyptus trees or poplars for making paper. Genetically modified fruits and vegetables are made palatable to people, especially in poorer countries in Southeast Asia and parts of Africa.

There are now genetically modified aubergines and papayas, tomatoes, potatoes, melons, pumpkin, but also wheat and rice. The so-called “Golden Rice” has achieved fame as GM rice. Read more about this under “Golden Rice” - the golden grain that is supposed to nourish the poor.